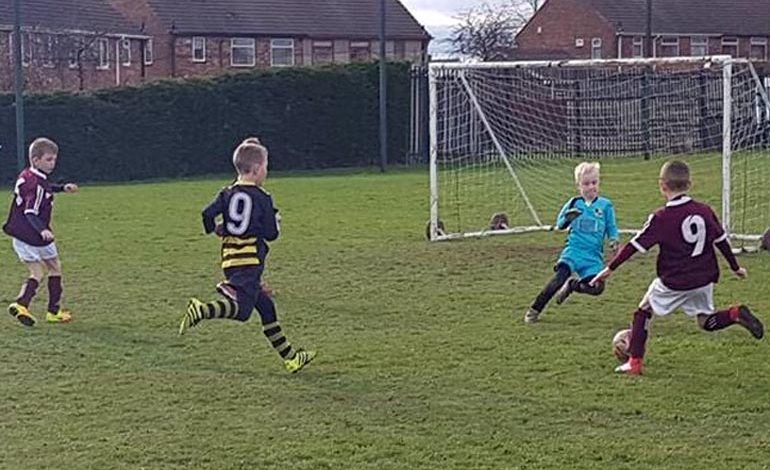 Aycliffe Juniors had a near full weekend of fixtures this week after a near wash out the previous weekend.

The Under 9 TJFA league team were away at Billingham United. They had drawn 2-2 with this team recently but put in a great performance to win this game 9-1. Man of the match Jayden scored a hatrick, there were braces for both Niall and Connor, Harvey and Dominic also scored one a piece. The second game saw Aycliffe gain a 4-0 win and Dan was the man of the match.

The Under 11 Russell Foster league team were at home playing against Humbledon Youth, who sit two places above them in the league. Despite a spirited fight back to bring the score from 3-1 to level at 3-3, the Aycliffe team eventually lost out by 4 goals to 3.

Under 11 TJFA league team faced league leaders Marton Whites at Sunnydale. They made a great start with Zack’s goal giving them a 1-0 lead. The physical visitors then went on to take all their chances in the first half to go ahead 3-1 at the break. Zack scored again in the second half but the game was lost 5-2 despite a great effort form all the players involved.

The Under 12’s played away at Normanby Black and secured a 4-1 win. The Under 15’s had a home game against Cargo Fleet aiming to leapfrog them in league. They took a 3-0 lead but then disappointingly lost 4-3.

The Under 17’s travelled to Billingham Synthonia aiming to go above them in the league. In a scrappy first half Tom scored twice to give Aycliffe a 2-0 lead. Some good direct play from Billingham as well as some poor defending saw the home team move in to a 3-2 lead. The Aycliffe team though never gave up and scored an injury time equaliser to make the final score 3-3.

The Under 23’s were at home to Whinney Banks aiming to make ground up on the leagues third placed team. There were a few key players missing and they went 1-0 behind before Slatcher crossed for debutant Vincent to head in the equaliser. In to the second half, and after a couple of calls for penalties were not awarded to Aycliffe it was the visitors who took the lead again with a nice lobbed finish. Vincent set up Raisbeck to draw level at 2-2 but Whinney Banks capitalised on a defensive mix up to win the game 3-2. A disappointing result for our oldest players, Raisbeck was named as man of the match.