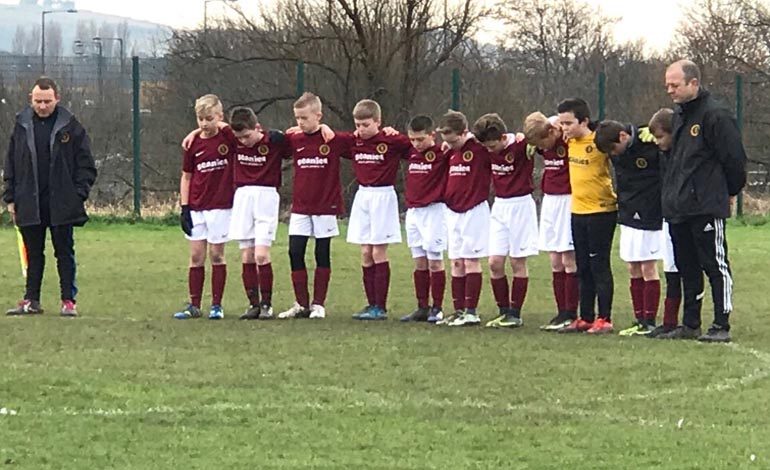 Aycliffe Juniors footballers enjoyed another great weekend of action across both league and cup competitions. There was a one minutes silence before many TJFA games to mark the sad loss of Eddie Hamblett, an Under 14 player from TIBS FC.

The Under 9 TJFA League team played in a Challenge Cup quarter final against Golden Flatts. Their opponents play in the league above Aycliffe but the Juniors defied the league structure and recorded a 4-1 win to move in to the semi finals. Niall scored the first goal before Golden Flatts equalised, then Niall’s second restored the one goal lead. Connor smashed home the third before Jayden’s penalty completed the scoring. The second friendly game was won 5-2 and the mornings men of the match were Jack and Harvey.

The Under 10’s faced Hartlepool Pools Youth and despite Rhys’ goal and a man of the match performance from Jack they suffered a 4-1 loss.

The Under 11 Russell Foster league team were at home against Seaham Coast. The surface was quite boggy but a reshuffle of the pitch size ensured the game went ahead. Man of the match Noah fired in a great hatrick and Sam also scored. All the team contributed positively in a well deserved 4-2 win.

The Under 11 TJFA league team travelled to Grangetown YCC for a difficult quarter final league cup tie. They found themselves a goal behind despite dominating early periods of the game. Taylor headed home a corner to equalise then Lucas broke away and finished well to give Aycliffe a 2-1 half time lead. Charlie scored early in the second half but Grangetown got a goal back to make it 3-2. It was Charlie who then broke through the defence to get the decisive fourth goal and seal the win. Despite a late consolation goal being conceded to make the final score 4-3, the Aycliffe team won and now progress to the semi finals.

The Under 12’s were involved in a mid table clash against Darlington 21st All Stars Jets and were beaten 4-2. The Under 15’s also travelled to Darlington to face the RA Spitfires team who have had a difficult season so far. The Aycliffe team ran out comprehensive 13–2 winners.

The Under 17’s were due to host Normanby United in a second against third league clash however their opponents couldn’t raise a team so this game was called off.

The Under 23’s were up against Seaton Carew in a Durham FA league clash. They got an early lead when M Howe scored first from close range and then added another after being assisted by his brother to put Aycliffe 2-0 up. Scott added the third goal after Seaton had clawed one back and it was 3-1 at the break. In the second half M Howe completed his hatrick, McLeod, Fitzgerald and Gibson got on the score sheet and Scott got his second in an 8-1 win. David Gibson was chosen as the man of the match.