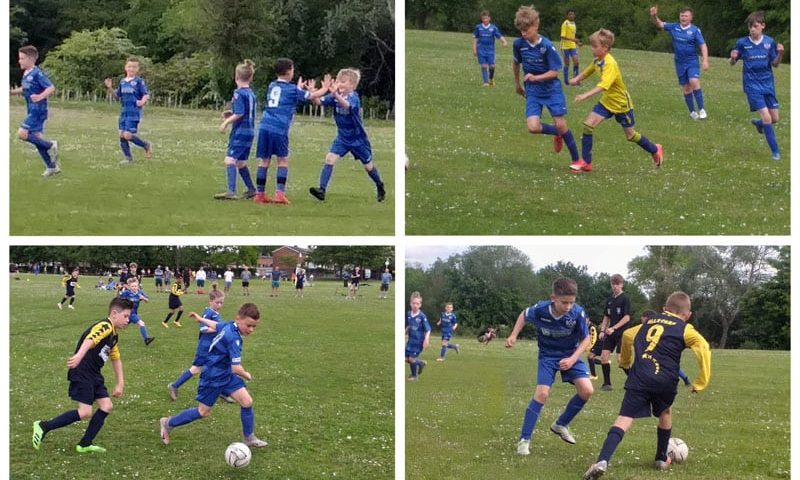 U8s Blacks we’re back in league action this morning at home to Coulby Newham. The boys were in a confident mood and scored through some lovely passing play, but the away team quickly drew level. HT and all square. Second half the boys, their passing, and work rate was really impressive and they went on to secure a great result & improving each week. Goals from Regan & Fin. MOTM Fin C

U9s Juniors hosted Darlington All Stars. A fantastic game from start to finish, some really quality on show. All Stars took the lead early but Aycliffe didn’t let this get them down, they continued to play some brilliant passing football & the goals came, Marley, Ernie, Jonah & Sammy scoring with Jack unselfishly setting all of them up. All-stars got it back to 4-4 but Aycliffe pressed & an unbelievable strike from Dom got the result. MOTM went to Jack for an all-round brilliant display of skill, inc 4 assists.

U9s whites played Whickham in a close game, level at HT. Second half and we started to show signs of fatigue in the heat and gave the ball away too much, with the opposition side taking full advantage of and managed to grab the win. We throughout the game with goals for jack and Dom. MOTH going to two players, Jensen for some cracking saves and defender Sammy who never stopped.

U11s played Heighington. We started well with George, making a guest appearance, passing the ball well. Heighington went ahead against the run of play. Aycliffe grabbed one back through Alex. Thomas pounced on a mistake to take the lead. It was an end to end game, Thomas keeping everyone going and then smashed home a volley to grab a share of the spoils. MOTM Thomas. Scorers Thomas and Alex.

U12 whites hosted Brompton Juniors who took the lead 15 minutes in. A super free kick from Ethan made it 1-1 at half time. Ethan put us ahead by finishing a goal mouth scramble, 2-1. Brompton then scored 2 to go 2-3 up but after a rest, Ethan put in a fantastic corner for Henry to finish off giving us a well-earned 3-3 draw. Team performance was awesome and improvement showing throughout.

U12s blacks away to Brandon. With the sun shining the lads where ready to go. Alex scored a belter from long range & Jayden H also scoring from long range, lobbing the keeper. Cody, Jayden & Keaton adding goals in an untouchable first half display. 2nd half and the lads were at 100%, another from Alex, then Danny and Keaton, awesome! Brandon grabbed another making the final score 8-1. 3 MOTM’s, Keaton, Harry and Danny. Well done lads proud of you all.

U15s hosted Washington. A good start from both sides, with Washington taking the lead, before a well worked goal saw Callum cross for Bailey to finish. Washington gained the advantage again with a well taken finish just out of Shae’s reach, HT & 2-1. Washington extended their lead as a long ball over the top drew both our keeper and their forward, and a fair but tough challenge from both sides saw the ball bounce in, but a nasty clash of heads. Both players luckily are ok. The incident took the wind out of Aycliffe’s sails, with Washington running out winners 1-7. POTM: Lily/Callum Scorer Baily.

U16s travelled to Cargo Fleet this afternoon and came away with a 1-6 victory. Class performance from start to finish. We dominated the game from the whistle and never let them in it, playing some great football. Goals from Jack x2, Brennan x2, Evan and Gregg. No MOTM as all the squad today were superb.