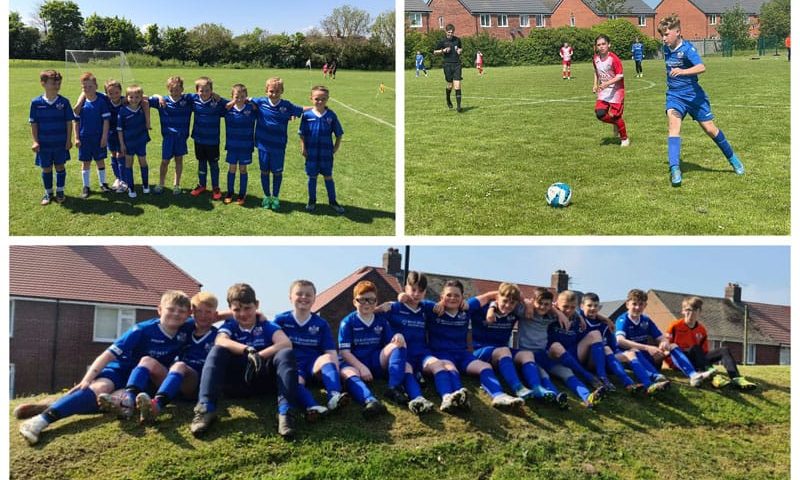 U8s Blacks played South Park Rangers in a 7v7 friendly in preparation for next season. Despite the new formation and people playing in new positions the lads put in a great performance. Aycliffe opened the scoring but a tight first half saw them go into HT level. Despite the heat, Aycliffe played some lovely passing football and came away with a great result. MOTM Regan

U8 whites took on Brandon United. Despite an excellent performance from all the boys, they didn’t get the rewards they deserved. The woodwork played a major part in keeping us at bay. Excellent game to watch. MOTM was Josh, his energy was relentless and bagged his first goal too.

U9 Juniors welcome FC Hartlepool Athletic to Woodham this afternoon. With only 1 sub in this heat, we knew it was going to be a tough game. Aycliffe didn’t seem up for it & Hartlepool capitalised on that & the tired legs. MOTM went to Sammy for playing well in whatever position asked & staying focused throughout the game.

U9s Whites played Darlington All-Stars in a great game of football in scorching heat. Aycliffe played great football throughout the game. Passing, talking and movement with the added bonus that most of the team grabbed a goal each. MOTM went to Dom for a controlled performance, great passing and positional play.

U9s Blacks v Hilda Park. The boys were unlucky today, the game started well with the game going our way, Rhys finishing well thanks to a lovely cross from Benjamin. The boys powered on through despite the heat, but it just wasn’t our day today, with Hilda finishing the stronger. Well done lads for trying so hard today. MOTM was Max.

U12s Blacks headed off to Sunderland Farrington. With a depleted squad inc no keeper, the lads played well in new positions. Alex bagged the opening goal. We were passing well and making good runs, but they grabbed a scrappy goal. Farrington went ahead and decisions didn’t go our way, but Keaton scored in last 10 mins. We were now all over them, but the heat finally took its toll. FT and a 2-2 draw. Well done Aycliffe.

U13s whites lost 4-2 to top of the table Boro whites. We were excellent and deserved something out of the game but were unfortunate with several decisions going the way of the home team. Brad and Aidan were the scorers and Brad was awarded MOTM.

U15s: Two matches in quick succession for the U15s saw us host Farringdon on Thursday, and while the result didn’t go our way with a 5-1 home defeat, there were some excellent performances. Goal from Charlie, POTM Lily. We travelled to face Washington Juniors on Saturday, and despite falling 2-0 down, a great strike from Charlie and a penalty from Anthony got us level. A deflected strike put the U15s a goal behind again, but a late equaliser from Charlie got a well-deserved draw at 3-3. POTM Charlie

U16s looked to extend their winning run to 4 games, and it was all going great taking a 3-1 lead with goals from Callum, Jack and Brennan. The rest of the game didn’t go our way. Wasted chances, 2 missed penalties and gifting them goals saw the game finish 5-3 to Thornaby. We go again next week.