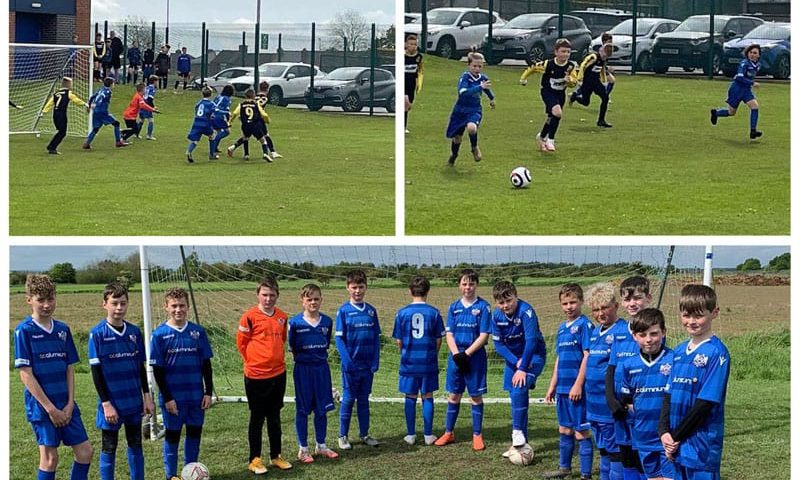 U8s Blacks travelled to Billingham Synthonia on Sunday morning. Billingham looked up for the game as soon as the whistle blew and quickly took the lead. Their great play continued from the home side throughout the game, with Aycliffe fighting hard to keep them at bay. A spirited last 10 mins saw Aycliffe finally produce the football they capable of and Regan grabbed a consolation for us. Overall, a very tough match for the lads, with Billingham deservedly coming out on top. Aycliffe MOTM Jacob Caygill

U8s whites made the journey up the A1 to play Washington Utd Navy under 7s. The home team were a quality outfit from the start, mostly being made up of academy players, but the Aycliffe lads kept going till the end. MOTM for Aycliffe going to josh

U9s whites played Washington on Saturday morning in the RFYL premier division. In a well-balanced match, both side created lots of chances and played some fine football. Aycliffe were trialling a new formation for this fixture, and it worked well! They took the lead several times but unfortunately decisions near the end of the game went against them and there was nothing between both teams at final whistle. Some well taken goals from Jack x2 and James. Man of the match for Aycliffe going to James for a strong performance in a new position.

U9s Blacks took on Seaton Carew Lions. A tough game for the Blacks against very good opposition. Seaton Carew Lions played extremely well with their overall passing and positional play got the better of the Blacks. This didn’t deter Aycliffe and they gave it everything right up until the final whistle. So today wasn’t their day, but a great effort from the team. MOTM for Aycliffe awarded to Rhys, his passing and general control in the centre of defence was excellent.

U9s Juniors travelled to Darlington 21st All-stars. Aycliffe started brightly playing some brilliant football & goals from Ernie & Marley. A slight lapse in concentration on the stroke of half time allowing All-stars to pull one back. Second half saw chances for both teams but with both keepers on fire and no more goals were scored. MOTM went to the whole team for a fantastic team display.

U12s whites stormed to victory with an emphatic 5-0 victory against Eaglescliffe Yellows. Ethan opened the scoring in the second minute with a volley to beat any keeper. Jake grabbed a hat trick to give us a 4-0 lead at half time. Jack added a 5th in the second half and was awarded Aycliffe’s MOTM. Prior to the match, the lads held a minute’s silence, to show their respect for recent sad passing of Jordan Banks.

U14s played host to Carlton Miniotts on Sunday morning, and continued their awesome start to the season. It was top versus bottom which saw the home team come out comfortable 5-0 winners with goals from Josh x 2 Trav, Reece and Sam. The victory keeps us top of the league with 12 wins from 12.