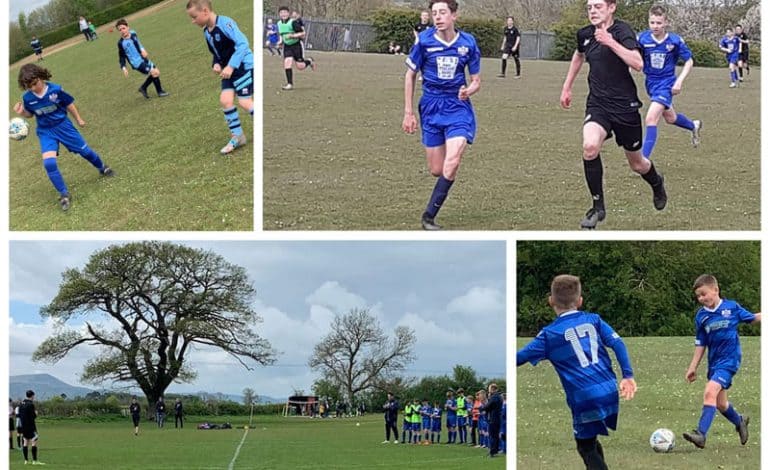 Prior to kick offs, all NAFC teams paid touching tributes to Jordan Banks with a minute’s applause, RIP little fella.

U8s Black’s hosted a good Leven Junior side this morning. Another improved performance against an excellent team whose passing, and finishing proved too much for them. Not the result we wanted but the boys’ attitude was first class. MOTM Leo B

U8s White’s played Fast Feet Juve & dominated the match, but it wasn’t to be our day. Will got MOTM for his great timed tackling at the back. All the lads were amazing, Harry and Oscar scored.

U8’s White’s Another incredibly good game against Absolute United Whites. We just could not find the net, peppering their goal and had one cleared off the line. Another fighting performance didn’t get the result they deserved. MOTM William B.

U9 Juniors hosted Bishop St Mary’s Aces. A close game with both teams coming close, HT was level. Aycliffe started the second half brightly, Jonah teeing up Jack to get his first. Bishop tried hard, but we kept a clean sheet & Jack added another. MOTM Jack. A well-deserved result.

U9 Blacks V Blackhall Monks Reds. A tough battle in the first half with a few opportunities, HT evens. The second half was similar, with Blackhall getting a late goal. The lads kept pushing but it wasn’t their day. All the boys held their heads high today. MOTM was a tough call and awarded to Alfie.

U11s played unbeaten Redcar Town. The first half was close, Logan keeping us in it. Second half & Redcar scored 3. we pushed to get back into it and Alex scored a superb goal, a great assist from Ethan. Some lovely football and unlucky not to get more from the game. MOTM Alex

U12 Whites played Linthorpe Academicals away. Linthorpe went ahead on the stroke of HT. Then a perfect corner by Ethan, which Henry fired home. Aycliffe dominated and took the lead with a quality strike from James. Linthorpe grabbed an equaliser resulting in a fair 2-2 draw. MOTM was Henry

U12 Blacks faced Brandon with a depleted squad. HT and it was 0-0. second half couldn’t have started better, Leon grabbing 2 in 4 mins. Brandon grabbed 2 back, only for Leon to decide he was having a 3rd with a superb goal. FT 3-2 Aycliffe. MOTM was keeper Harry for being class throughout.

U14s made it 11 wins from 11 with victory over Great Ayton. Trav scored early, but 3 goals for the home team saw us go in at HT 3-1 down. Second half and Trav and Alex brought it back to 3-3 before Jordan scored last minute, 3-4. Trav completed his Hat-Trick in stoppage time, coming away 5-3 winners and moving 3 points clear at the top of the league.

U16s hosted top of the table 21st Allstars. A totally dominant first half & 3-0 up at HT, goals from Brennan, Callum and Jack. We continued to play the better football. All-stars grabbed one back 3-1 but Brennan restored the 3-goal lead. Allstars scored late on but we ran out won 4-2 winners. 3 wins on the bounce.