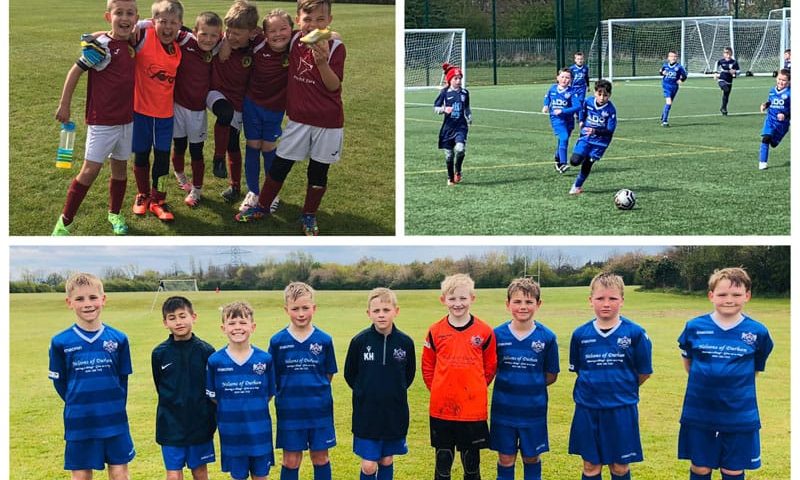 U8s Whites played Fast Feet Juve. It was a close game with some good passes and defensive work. Aycliffe had a lot of chances but could not find the back of the net, hitting the post at least four times. MOTM awarded to Ellis S.

U8s Blacks travelled to Coulby Newham Juniors. Aycliffe soon found themselves up thanks to a well taken goal by Regan. The opposition drew level but Aycliffe continued to work hard, putting in some great tackles. Further goals came from Regan and Fin. A disciplined display though from Jacob, Max and Findlay kept Aycliffe on top with keeper Finley making great saves, keeping Aycliffe ahead with further goals from Regan. MOTM awarded to Regan.

U9s Blacks played against Washington. Aycliffe started out strong but could not seem to get a goal and went into half time with no goals from either side despite lots of attempts. Benjamin put Aycliffe up in the second half but Washington quickly replied. Aycliffe’s defence worked hard today and stayed strong throughout the game. MOTM was awarded to Mathis – outstanding performance today, he never gave up and worked hard throughout the game.

U9 Juniors travelled to Thornaby, starting brightly with some great passing, Aycliffe took the lead with a deflection. Thornaby responded with 2 before half time. It wasn’t Aycliffe’s day from then on, chances were created but apart from a Jack goal they couldn’t find the back of the net. MOTM went to Mason for his effort throughout.

U11s travelled to Nunthorpe. Aycliffe went behind early on but changed things round and then began to dominate the game. Unfortunately missed chances resulted in them conceding more goals. Second half, Aycliffe played well and scored a fantastic goal courtesy of Thomas. MOTM was awarded to Keaton.

U13s Whites played away against Leven. A tight game but Aycliffe were on the wrong end of another 3-2 defeat. Aycliffe played really well and had they taken their chances would have won the game. Ollie and Aidan scored the goals. Brad was awarded MOTM.

Under 14’s maintained their 100% start to the season with 2 wins this week, a convincing 6-2 win over Great Ayton on Tuesday with Reece & Jordan giving the lads a 2-0 lead before Noah’s crucial penalty save. Travis grabbed a Hat-trick, before Thomas A finished the scoring. Kader were next on Thursday, with the lads coming away with a 11-2 win. Goals from Travis (7), Reece, Sam, Tom A and a bullet header from Jake.

U16s travelled to Normanby with the bare eleven. The first half performance was fantastic. Aycliffe fell behind twice, one being from a dubious penalty decision, but fought back to 2-2 at half time, with goals from Brennan F and a free kick from Jack C. Beginning of second half Aycliffe dominated the game then ran out of steam. Against a team with five subs, it took its toll. Aycliffe conceded three in the last twenty minutes to lose 5-2.