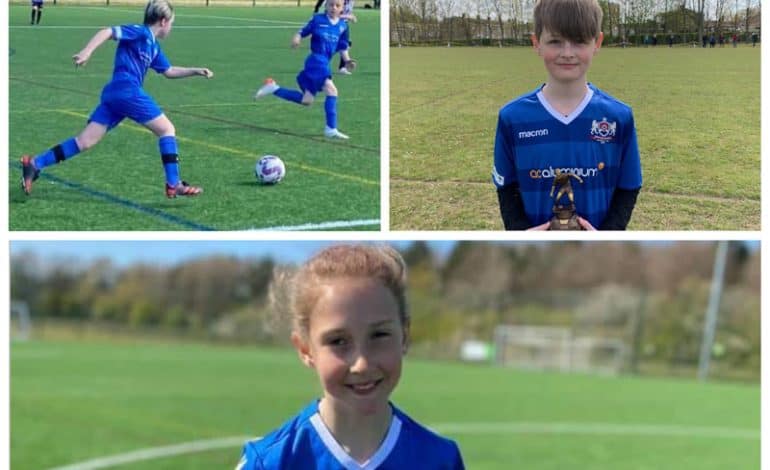 Another round-up of action from Newton Aycliffe’s junior teams…

U8s Blacks played against Leven Whites. It was another case of playing a very good team who should be in a far higher division, but Aycliffe competed well in the first half, going in down at half time. Second half Leven dominated the game. Another tough day for the kids but we go again.

U8s Whites played against Hebburn Town Juniors. It was a tight game and Aycliffe went in down at half time. They had been pressing Hebburn hard but made a few daft mistakes that cost Aycliffe. MOTM was awarded to Josh.

U9s Blacks played against Chester le Street Lions. Aycliffe only had seven players but they gave it their all, however, the opposition proved too strong. Starting well with a fine bit of play from Benjamin and Rhys, Aycliffe took the lead. The opposition though took hold of the game and scored a few in quick succession. The aim for Aycliffe in the second half was not to concede as much as in the first and try to score in which they succeeded with a goal from MOTM Benjamin.

U9s Juniors played away to Guisborough Town Whites. Aycliffe took the lead with a deflection from a Jonah cross but Guisborough responded and scored more. Aycliffe came back with one from Jack after some brilliant passing. Aycliffe kept creating the chances but could not convert any more. MOTM went to Ernie.

U11s played away at Felling Magpies this morning. A fantastic game for Aycliffe but unfortunately Magpies lost their keeper to injury early on. Aycliffe saw some great moves, brilliant goals from headers and even a cheeky back-heal goal from Thomas. Aycliffe were solid at the back with the return of Oscar in the back 3 who all had an excellent performance. Well done to Celina who was awarded Player of the match.

U12s Whites picked up another 3 points with a steady 3-1 win at home to Linthorpe Academicals. Goals came from Jake, Oliver and an own goal from Linthorpe. Linthorpe got a conciliation goal but rarely troubled Aycliffe thanks to their solid defence. MOTM went to Reiss.

U13s Whites played against Boro Reds. This was a really close game in the first half but Aycliffe missed a penalty and two good opportunities. Boro Reds took their chances to make it 2-0. Second half Aycliffe went for it and scored through Niall but Boro Reds ran out winners with the game ending 1-5. Brad was awarded MOTM.

U14s played against North Ormesby with Aycliffe leading 5-1 when the game was abandoned with 8 minutes remaining. Goal scorers were Jordan, Jake, Tom and Travis x 2.

U15s travelled to Farringdon on Saturday, looking to add to recent positive performances. Aycliffe battled back twice to draw level with goals from Finn and James, however Aycliffe were unable to battle to secure at least a point that was deserved, with 3 quick fire goals at the end of the game seeing a 5-2 defeat. MOTM went to Louis.