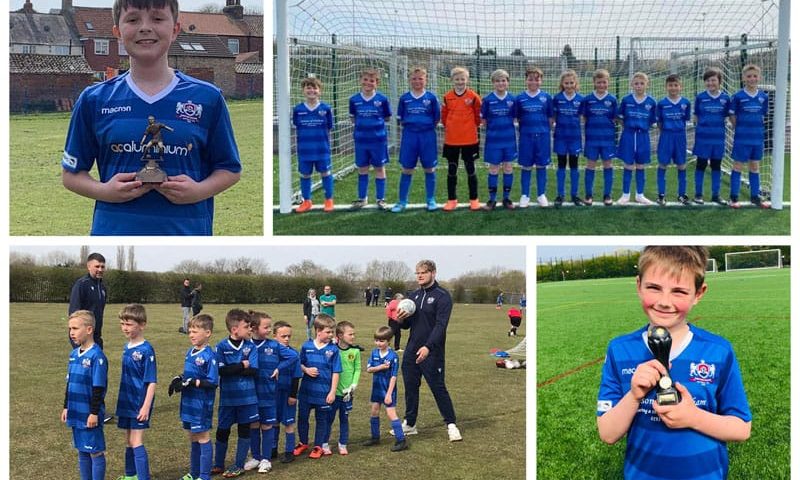 Another round-up of action from Newton Aycliffe FC’s junior team games at the weekend.

The U8 Blacks played against Darlington Spraire Lads. Aycliffe were outstanding from the kick off and headed into half time with smiles on their faces thanks to a first half hat trick from Regan and a goal from Fin. Darlington got a quick goal after the break to pull it back but Aycliffe showed great attitude with further goals from Regan and Fin. MOTM went to Regan

U9 Blacks played against Shincliffe. Aycliffe got off to a quick start with a goal for Benjamin and Alfie. A reply from Shincliffe did little to discourage Aycliffe as Alfie followed up with a great free kick before Benjamin scored again after a quick break. A swap around at half time saw Shincliffe get back into the game with a smart free kick. Aycliffe never give up and Benjamin got a deserved hat trick. Great effort all round with Mathis and Olly working hard at the back, Charlie, James and Charlie running their legs off. MOTM went to Benjamin

U9 Juniors played against Thornaby. A very slow start for Aycliffe saw Thornaby score goals. Aycliffe responded with some brilliant football. A long ball over the top to Jack with only the keeper to beat saw Aycliffe pull a goal back before half time. In the second a lovely pass out from Mason to Jonah who drove into the space and crossed it in for Tyler to finish it to pull one back. MOTM went to Ernie

U9 Whites played against Hurworth. It was a game of two halves. Aycliffe’s first 15 minutes were just too slow conceding too many goals early on, they won the second half but the goal difference was just too much. Overall a better display than last week and the boys deserve some credit for their second half performance. MOTM went to Jack and Dom for the work rate and goals.

The U11s played against Felling Magpies. Aycliffe played brilliant from start to finish and everyone played well, it was a really entertaining game with both Celina and Keighton both making their debuts. Excellent goals, outstanding saves and fantastic quick passing saw. Goal scorers were Callum, Thomas, James and Keighton. MOTM went to Callum.

U12 Whites played against Brompton. Brompton scored after 5 minutes. Brompton got a penalty and then scored for a third time before the break. The second half and Aycliffe came fired up and started to put Brompton under pressure. A penalty for Aycliffe and Jake scored. A free kick and Jack scored game on at 3-2. A through ball put Jake on goal and he slotted home for 3-3. Brompton went on to score another 3 past Aycliffe, for Jake to then put a free kick in the corner. A great battling effort but Brompton won 6-4. MOTM went to Jake.

U12 Blacks played Ouston. It was not a good day for Aycliffe; they only had 9 players due to injuries and players missing. MOTM went to goal scorer Alex.

U13s Whites played against Tibbs. Aycliffe won the game 1-0 in a scrappy affair. All the players battled extremely well. Aycliffe scored with 10 minutes to go and held on to an excellent win. Tyler R was the scorer. Jayden was awarded MOTM

Aycliffe U14’s entertained top of the league Darlington RA. Aycliffe started strongly, bursting into a 3 goal lead within 15 minutes, 2 goals from Travis and 1 from Sam. Darlington pulled 1 back, before Travis completed his hat-trick to give Aycliffe a 4-1 half time lead. Aycliffe dominated the second half with Reece scoring to give Aycliffe a 5-1 win.

U15s hosted Plains Farm Blues at Woodham, securing a deserved 1-1 draw after going a goal behind early in the game. Shae was excellent in goal, with some very good saves, Charlie scoring the equaliser. Bo was voted MOTM.