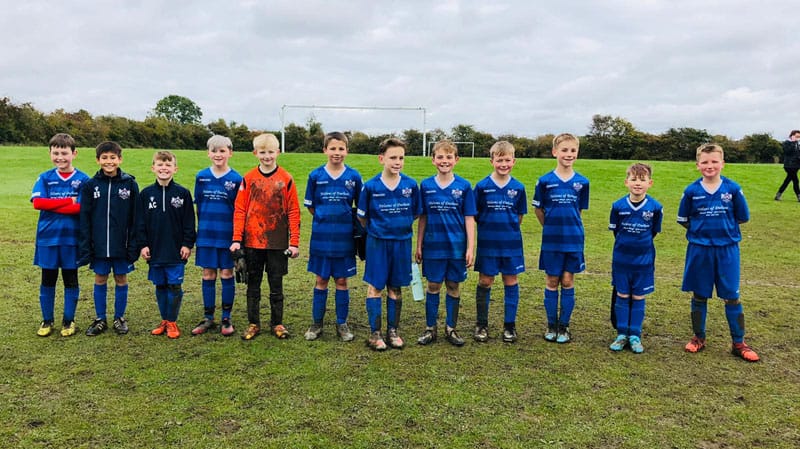 This week’s round up from Newton Aycliffe Juniors FC…

The U8s whites played against Hebburn Madrid in the RFYL. It was a frustrating game for Aycliffe who were up at half time with a Regan goal but it should have been much more as the team had loads of chances and a missed penalty which Oscar scored left top corner only to find the ref had not blown the whistle, it was disallowed and the keeper saved the retake. Aycliffe were not at their best in the second half with a few defensive mistakes with the players just not switched on enough. William was outstanding in goal with some fantastic saves winning MOTM.

The U8s Blacks hosted Skelton TJFA Maroon Division. The two teams were evenly matched and the game was a good contest. Aycliffe worked really hard, chasing every loose ball, putting in some great tackles, working hard on their passing and moving but unfortunately made a few too many costly errors. Goals in either half from Regan kept Aycliffe in the game but in the end they could not take their chances. A fantastic effort from the boys though in what is proving to be a very tough league.

The U9 whites played another RFYL Premier League game against Washington. Unfortunately, again the boys ran out steam in the second half, after a great first half performance when they finished leading. They let that lead slip eventually being pipped to the post. MOTM going to Tyler for his constant battling.

The U9 Blacks played Hetton Juniors Division 9 RFYL. It was a very tight game saw Aycliffe take the lead three times only for Hetton to bounce back on each occasion. Goals today came from a lovely header from Max looping over the keeper, a great finish from Benjamin and a great long hit from Charlie that caught Hetton out. The three keepers sharing stints between the sticks did really well. With Max, Rhys and Charlie making great saves.

It was another good competitive game today for the U9 Juniors away to Boro Rangers City. It was a close game for most of the match but Aycliffe let their heads drop towards the end which saw Boro Rangers capitalise. The score line did not reflect the game and the effort from the team. Aycliffe’s goals came from Dom (2) & Mason. MOTM went to Dom who had a great game out of goal then he stepped up in goal when Jensen got injured in the second half.

The Under 11s played against Richmond Town, TJFA White Division. Richmond starting really well and had several shots on target as Aycliffe struggled to get out of their half with Logan producing save after save to keep them in the game. Aycliffe’s best effort was a free kick from JJ which the keeper did well to punch away. A strong team talk at halftime and a reshuffle with Thomas coming on made a difference, It was Richmond who scored again though and completely against the run of play. A lovely ball played Callum through and he took it around the keeper and slotted it home. Aycliffe were pushing hard for the equaliser when another breakaway saw Richmond score another goal which deflected in off the post. MOTM went to Logan

Newton Aycliffe under 14’s went into Sunday’s home game against Coulby Newham in high confidence following a 10-3 win last week. With a depleted squad, the lads won a competitive game 3-2 with goals from Reece 2 and Travis.

The U15s welcomed Harton and Westoe to Woodham for a quick return game after also facing them last week. With a strong squad available, Aycliffe began positively with some good passing and an early effort from Charlie crashing back off the bar. Harton however soon took the lead against the run of play, with a long ball being chased down and finished off well. This did not deter Aycliffe who kept their composure and found a deserved equaliser with an excellent long distance strike from Bo into the roof of the net. The second half saw a flurry of activity, with an early goal from Harton putting them in the lead again, but Charlie then scored from the kick off taking a brilliant pass from Matthew in his stride rounding the keeper and finishing well from a tight angle for 2-2. Aycliffe had the chance to go in front, but the keeper made a brilliant save from Anthony’s penalty to keep the scores level. Harton took the lead following a goalmouth scramble. Aycliffe did not let heads drop though, with Charlie again driving into the box before being fouled. Although the keeper saved the penalty, Charlie was on hand to slide the ball home for 3-3.