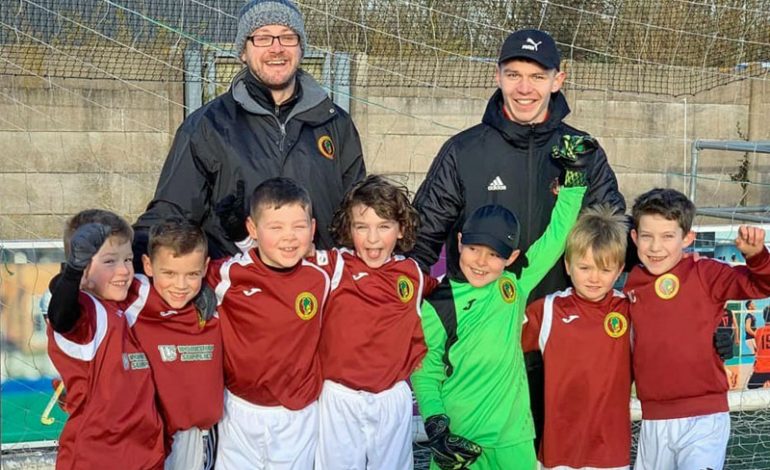 As we entered the second month of the year,the football fixtures continued to come thick and fast for our Aycliffe Junior teams.

Our Under 8s whites had their final game of their season knowing that getting at least one point would win them the league.The team hadn’t lost a single fixture up until this point for their entire season winning all games except the one they drew. Their opponents were second placed Crook town. It was always going to be a great game of football and this matchup didn’t disappoint however the determination of the Aycliffe side proved too much and they walked away 4-3 winners. Three of these four goals came courtesy of Jack with Dom also getting on the scoresheet with the man of the match award going to Jensen for an excellent goalkeeping performance. This final game wrapped up what can only be described as an incredible campaign for the team and their coaches. The lads now move onto division one where they will continue to face tough opposition and hold their own.

The Under 8s blacks travelled to Durham for their match. It was a closely contested game with chances at both ends of the pitch. For the whole game Aycliffe pushed forwards with the ball hitting both posts and the crossbar however this and a goal from Rhys wasn’t enough to secure them any points to wrap up their league campaign. The man of the match was awarded to Benjamin.

Our Under 8s juniors played at Woodham against Hartlepool Pools Youth Whites. It was an excellent game of football with the lads showing their ability in a 5-1 win. Jack bagged himself a brace with Jonah, Dom and Man of the match Daniel all grabbing themselves a goal apiece.

The Under 9s traveled to play Middleton Rangers in what was always going to be a tight game. Aycliffe soon found themselves a goal down however this didn’t affect their performance and two brilliant goals from man of the match Tyler got them straight back into this fixture and won the Aycliffe side all 3 points.

Our Under 10s faced off against Heighington in horrible conditions. After a one sided half Aycliffe somehow found themselves a goal down going into the break. Early in the second half JJ got his first goal for the club levelling up the scores to 1-1. Unfortunately for the juniors Heighington also got a goal in the second half and this got them all 3 points. It was a valiant effort from the Aycliffe team who put in an excellent performance. Liam was awarded man of the match from this fixture.

The Under 11s Blacks made the trip to play Gateshead at the weekend. It was a great game for the spectator however it wasn’t Aycliffes day with a goal from Alex not being enough to get any points for the Juniors.

Our Under 11s Clarets hosted a well organised Riverside Blues team. Aycliffe had a slow start as the visitors put the team under some pressure however the home side held their own and fought back into the game with goals from Ashton, Alex and man of the match Harry being enough to get Aycliffe the victory.

The Under 11s Whites played hosts to Prissick Madrid. The last time these two teams met it wasn’t a good outing for the Juniors side with them getting beat by a 12 goal difference so they were keen to make a better account of themselves this time out and that they did with Aycliffe showing their was a massive improvement in the teams ability and wiling to battle for the results they want. Ethan got Aycliffes goal and the man of the match award was given to Joshua for his work rate throughout the fixture where there was a 2 goal difference between the two teams.

Our Under 12s Whites faced Billingham Synthonia at the weekend. It was an excellent game for the high scoring Aycliffe team with Niall grabbing 5 goals and Tyler, Jayden and Harvey also getting in on the act. Niall was awarded the man of the match award for an excellent attacking performance.

The Under 12s Blacks traveled to play Bedale. The team started very slow and conceded from kickoff. However this forced a reaction and the team joined together to play some inspired football spinning the game on its head and earning them a 6-5 win. Rhys, Jake and Lucas all got 2 goals a piece with the man of the match award going to Emrehan for an excellent performance.

Our Under 13s faced off against Kader in a top of the table clash. It was an amazing game to watch with 8 goals being scored. Although the could never be called who was going to be the victor from this fixture, when the final whistle was blew it was Aycliffe who were 5-3 winners thanks to goals from Daniel H, Joe, Thomas A and Josh.

The Under 14s faced Shotton Colts in what was an interesting matchup. Although the game had its controversial moments there was some good football being played. There was a penalty saved, and a lot of fierce competition both teams made sure that when the two sides face off again in a fortnight, the game is not to be missed. Both goals Aycliffe scored came courtesy of man of the match Charlie.