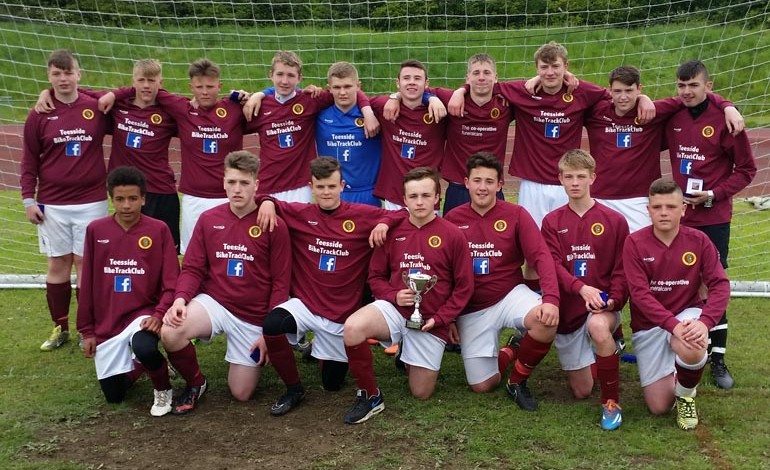 Newton Aycliffe Juniors had five teams competing in their summer tournament at Sunnydale in Shildon.

Each team played in groups of six with the top two progressing to the final. A damp morning did nothing to affect spirits and the whole day was played an enjoyable atmosphere.

The Under 7’s played five league games, winning four and losing one in the group stage. This resulted in a final against Bishop Auckland Aces who had beaten us in the group stages in a tightly contested 1-0 defeat. Aycliffe started brightly in the final scoring two quick goals to go 2-0 up at half-time. Bishop came out strongly second half and scored two quick goals to level the game 2-2. Bishop then scored a winner with the last kick of the game to make it 3-2.

Aycliffe were outstanding throughout the day and played some excellent football being unlucky to lose out in an excellent final.

The Under 8’s had a record of won one, drew three and lost one. The day was opened with a defeat going down 1-0 to the eventual winners Deerness Valley Lightening then defences were on top with three successive goalless draws against Greatham, Darlington RA and Deerness Valley Thunder. The final group game proved to be our final game of the day but a great victory against Newton Aycliffe Youth was enjoyed buy the home team.

The under 9’s were in a very competitive group of teams who have won many titles between them over the last season. In the first match a deflected goal was enough for Stockton Town Yellows to win 1-0. This was followed by a draw against a very strong Marton Whites team, Aaron levelling the game after an early goal was conceded. Willington were their next opponents and despite dominating possession and territory they couldn’t find a goal and this one ended 0-0. The final two games ended with good 1-0 wins after Charlie’s sublime finish was enough to beat Marton Blues and Jakes penalty the difference against Middleton Saints.

The Under 13’s had a great tournament starting off with a draw against Bishop St Mary’s then recording a hatrick of victories against Newton Aycliffe Youth, Darlington TSC and Wolviston. Second place in the group and a trip to the final was secured with a 1-1 draw against Byers Green. In the final it was Byers Green who turned out winners despite a determined effort from Aycliffe a late goal gave Byers a 1-0 win.

The Under 16’s first game was a derby against Aycliffe Youth, a very tough game against a Division 2 side, but they ran out 1-0 winners with a great header from Kieran Maughan from a corner. Their second game was against Darlington All Stars from Division 3, again another highly contested game but Aycliffe were so determined that this was going to be their day, winning this 1-0 aswell with Kieran Maughan scoring again. Next up was Spennymoor Town who had won the first two games scoring seven goals. The lads battled hard and defended really well resulting in a great contest which ended 0-0. Aycliffe progressed to the final against Spennymoor which ended 1-1 after normal time, with Spenny winning on penalties.

“A fantastic time was enjoyed by players and parents alike from all the age groups,” said NAJFC.

“A huge thank you to all who contributed to organising and running such a successful day.

“We have received many notes of thanks and compliments from the attending teams about their positive experiences on the day and how well the whole event was overseen.

“None of this would have been possible without the support of our hosts Sunnydale Leisure Centre to whom we extend our thanks. All to come again in twelve months time!”

NAJFC are very grateful for our sponsors who have supported this event at each age group level without their support these events would not take place: