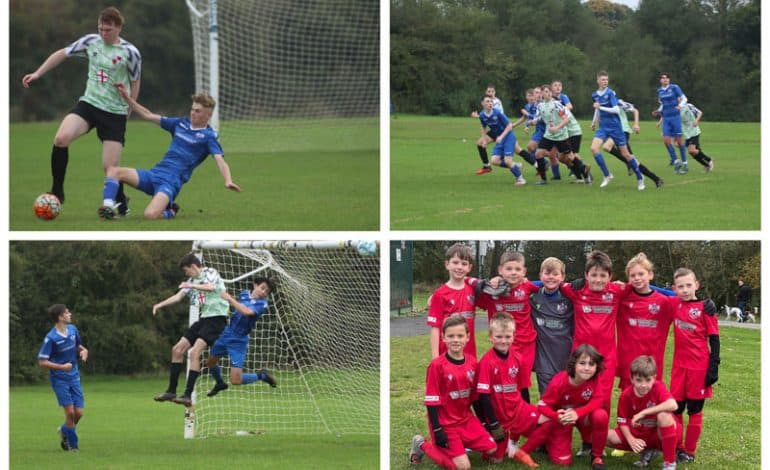 U9’s Blacks hosted South Park Rangers. Against a very physical opposition Aycliffe took the lead, a screamer from Regan. South Park levelled with a penalty. Aycliffe took a deserved lead before half time with Regan scoring again. Second half Aycliffe grew in confidence, working hard all across the pitch, a lovely through ball from Regan put Fletcher clear to finish. Aycliffe continued to dominate and added another from Fin. Outstanding display. MOTM Regan

U10’s Juniors travelled to Boro Rangers Madrid. Another great game of football & solid team display. Boro Rangers took the lead early in the second half but Aycliffe responded straight away with a goal from Dom. Both teams created more chances but couldn’t convert. MOTM Mason with a solid defensive display.

U10’s Blacks put in an excellent team performance against Coxhoe. With only 8 available the boys dug deep and worked as a team! Unfortunately Coxhoe took an early lead but we kept our heads up and soon levelled, with an excellent corner from Rhys. Second half was full of action from both sides. Charlie John quickly put us in front, & 2 more from Rhys. MOTM Charlie & Lucas

U10’s Whites played a disciplined Washington PSG team. All game Aycliffe played as a team, never giving up and for the first time this season kept a clean sheet as well as coming away with the spoils. Goals from, Jack 2, Oliver and Jonah. MOTM Tyler W for a strong performance in every position he was asked to play

U12’s hosted North Ormesby in a tight game which saw very few chances, HT 0-0, helped by Logan’s incredible fingertip save. With only 1 sub available today, Theo came on at half time and a change of formation helped. It was scrappy game but Callum unselfishly laid the ball off to Oliver to finish. 10 minutes left & Ormesby equalised after unfortunate own goal, 1-1. With both teams having chances to get the winner, Logan kept us in it & Oliver’s header was saved by the Ormesby keeper. FT 1-1 Scorer Oliver, MOTM Logan.

U13’s Whites headed to South Park Rangers and it was a thriller. Runaway winners the last time they met, we rotated some players. Charlie scoring after 5 minutes with his first ever league goal. SPR equalised 5 minutes later & then took the lead 5 minutes after. Noah’s free kick then came close, striking the bar, then just before HT, Ethan’s long range effort made it 2-2 @ HT. Immediately from KO off Ethan intercepted a SPR pass and spotting the keeper off of his line, from just inside the half way line, launched Beckham like shot which sailed in. 10 minutes left & Ollie’s brave header came close to a forth. The game finished 3-2 Aycliffe. MOTM Joshua, a solid commanding performance. Well done lads for never giving up.

U13’s Blacks – hosted Washington blues, and were by far the better team 1st half, with a good goal from Alex putting us ahead. Second half showed how strong our defence was, as they came out fighting to the bitter end, snatching a last minute equaliser with an unlucky header from us, to make it 1-1 at FT. Great game to watch. We were just unlucky not to finish some chances. Still, a great game all round. MOTM Keaton, well done.

U14’s lost 2-1 at home against Hartlepool FC. It was a tight game, and they scored with the last kick of the game. Tyler S scored the goal and Harvey was awarded MOTM.

U15’s played hosts to Seaton Carew today. Despite falling behind on 3 separate occasions the boys kept their heads up and fought right till the final whistle, scoring the winning goal with the last kick of the game. FT 4-3. Scorers, Leighton x2, Tom and Ethan.

U16’s travelled to face Sunderland Rangers Blues on Saturday and started well, Anthony scoring in the first minute with a well taken strike from outside of the box. Aycliffe were strong throughout the first half, which saw chances to extend the lead with Nicole, Bo, Alex and Archie all going close. The second half was scrappy. Sunderland equalised from a corner, before snatching a win in the closing stages, final score being 2-1 Sunderland. MOTM Alex, Goal Anthony.

U18’s drew at home to Trimdon 3-3. After 90 mins we were 3-2 up, ref said 1 min added time. They equalised in the 95th minute?! Overall a great team performance, with our second goal being one of the best team goals I’ve witnessed in many a year. Goals from Dec, Jack and Gregg. MOTM Dec.