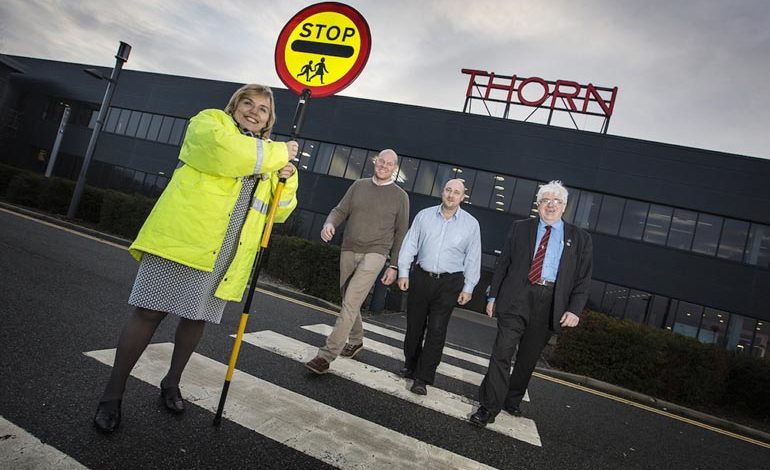 A talented inventor from Newton Aycliffe has developed the first upgrade to the school crossing patrol sign in five decades and believes lives could be saved as a result.

Newtonian Andrew Turner, who has an office at the North East Technology Park (NETPark) in Sedgefield, County Durham, is to meet with distributors about his illuminated lollipop design after winning the backing of a major road safety charity.

The prototype, which uses edge lit plastic and has an eight-hour battery life, was produced thanks to support from Thorn Lighting, in Spennymoor.

Andrew, with business partner Matthew Thoburn, was prompted to create his new-look lollipop stick after witnessing a near accident in Darlington one drizzly, winter morning.

“It made me think that the modern driver needs something more visible to stand out because of the number of distractions such as the abundance of brake lights and modern technology on the roads,” he said.

“The only thing which has changed over the decades is the school crossing patrol person’s uniform – they’ve become more highly visible but the stick hasn’t.”

Since developing the illuminated prototype, a survey conducted by Durham County Council showed that drivers were braking up to 40 per cent faster than with a normal stick. Further trials are planned.

“I really do believe it has the potential to save lives in the future,” said Andrew. “We’ve already hit our target in terms of performance, battery life and weight. Our next step is to be innovative in the manufacturing process to keep the costs down.”

Gavin Brydon, vice-president operations at Thorn Lighting, in Spennymoor, said the prototype had been created using one of their industrial laser etching machines.

“I believe this design will save lives. It’s at a very early stage but we’re very hopeful for Andrew’s success and we’re here to help him,” he said.

“We’re very happy to support local inventors and develop a research and development network. It’s a win-win for us.

“Many inventors can be fearful of bringing their designs into industrialisation by using large companies but Thorn is a very trustworthy company, so there is nothing to fear and hence why we have generated a strong relationship with Andrew.”

The prototype gained significant interest from local authorities at a recent road safety conference, where it also won the approval of Road Safety GB.

Alan Kennedy, Road Safety GB’s business and operations manager, said: “Road Safety GB is delighted to support this project. It is highly innovative and will help to improve safety on the way to and from school for our most vulnerable road users, young children.

“We have supported Andrew for a number of years providing advice and links to other partners and we wish the project every success.”

“Thorn has been an excellent support for Andrew, from providing the manufacturing expertise of its highly skilled team to specific machinery to produce such a fantastic prototype. Their commitment to supporting local inventors is great to see,” she said.

Andrew also plans to give back to the community with the launch of Andrew Turner Inventions next year, where he and his team will be delivering a programme to up to 30 schools to encourage children to come up with their own inventions before taking them through real life processes such as idea generation, proof of concept, prototype, patent protection, costing and materials and manufacturing. The programme is developed in collaboration with Northumbrian Water.