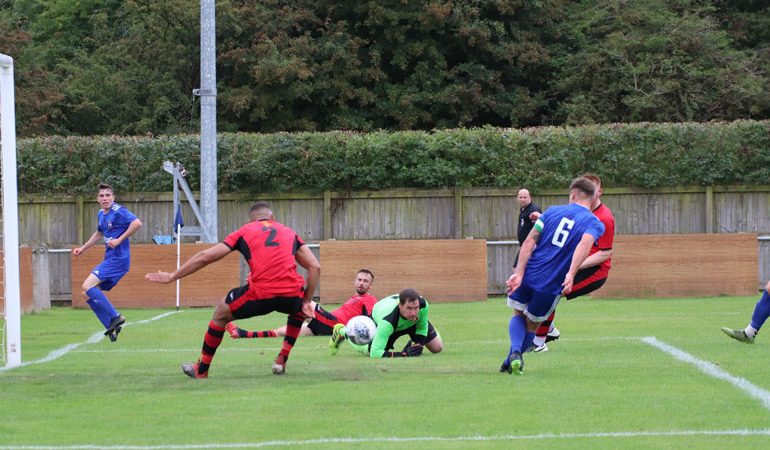 Newton Aycliffe surrendered a two goal lead in the final 10 minutes on Saturday as Abbey Hey came from behind to snatch a 3-3 draw at The Beaumont Landscapes Stadium in an entertaining pre-season friendly.

Aycliffe went behind early in the game but captain Aaron Brown’s close range equaliser meant the sides were level at the break.

There were a number of changes at half-time and Aycliffe raced out of the traps as Matthew Pennal scored just 23 seconds into the second half to give the hosts the lead before Adam Burnicle looked to have secured the win in the 70th minute.

Aycliffe missed a number of chances to extend their lead and were made to pay as Abbey Hey scored twice in the final 10 minutes to secure a draw.

It ws Aycliffe’s second pre-season game of the campaign following last week’s 5-1 victory over Tow Law Town and Head Coach Colin Stromsoy gave game time to his entire squad once more as players continue to try and impress ahead of the new season.

Arran Wearmouth, who scored twice in that win last week, almost opened the scoring inside four minutes after an inviting cross from Liam Jarvie. But the forward couldn’t quite divert it home.

Instead it was visitors Abbey Hey, from the North West Counties Division South, who made the breakthrough in the 12th minute after a stroke of misfortune saw Brown’s defensive challenge ricochet off his teammate back into the path of the Abbey striker.

He was able to lift the ball over the on-rushing Connor Phelan and poke the ball beyond Adam Pickford to give the visitors the lead.

Aycliffe threatened an immediate response with Jarvie and Phelan causing problems down the right with Phelan’s pullback cleared from the line.

The home side were soon level however as Brown capped off an excellent Aycliffe attack. Ben Reay picked up the ball just inside the Abbey half and drove towards goal playing a delightful one-two with Ben Dibb-Fuller whose back heel found Reay at the byline.

The midfielder pulled the ball back to Brown, who had stayed forward from an earlier set piece, and the skipper tapped home.

Aycliffe thought they might have had a chance to take the lead from the spot on the half hour mark after Wearmouth was brought down but the referee decided against it.

Minutes later Pickford had to be alert as he got down to his right to parry an effort wide.

Reay should have given Aycliffe the lead, this time linking up with Wearmouth whose reverse pass found Reay inside the penalty area unmarked but the goalkeeper pushed his effort around the post.

The end of the first half saw a number of meaty challenges as this pre-season friendly became a feisty encounter with the referee diffusing a number of comings together.

The second half saw almost an entirely different Aycliffe XI take to the field and they staked their claim inside just 23 seconds when Ethan Wood’s clever through ball found Andrei Ardelean whose cross was misjudged by the keeper and gifted Pennal an easy finish.

There was an improved vigour to Aycliffe in the early stages of the second half and Burnicle would have backed himself to have extended the lead in the 55th minute when he had time and space in the area but his strike was palmed over the bar.

Burnicle again found himself unmarked in the area on the hour mark after Ardelean put it on a plate, but his effort went narrowly wide of the post much to his frustration.

It was a case of ‘third time lucky’ for Burnicle who finally converted in the 70th minute after yet more smart play from Ardelean. Burnicle, with the more difficult of his three opportunities, slid the ball past the goalkeeper in off the post to give Aycliffe a 3-1 lead.

That should have been enough for the hosts but a long range strike which took a number of deflections to wrong-foot the substitute goalkeeper made for an interesting final 10 minutes.

The decisive moment came just three minutes later from an Abbey corner as a late runner escaped the defence and his diving header found the back of the net to level the scores.

Neither side was able to find a winner in a frantic final five minutes as the referee blew for full time.

It was another good workout for Aycliffe who continue their preparations next week, again playing behind closed doors due to govt / FA restrictions.