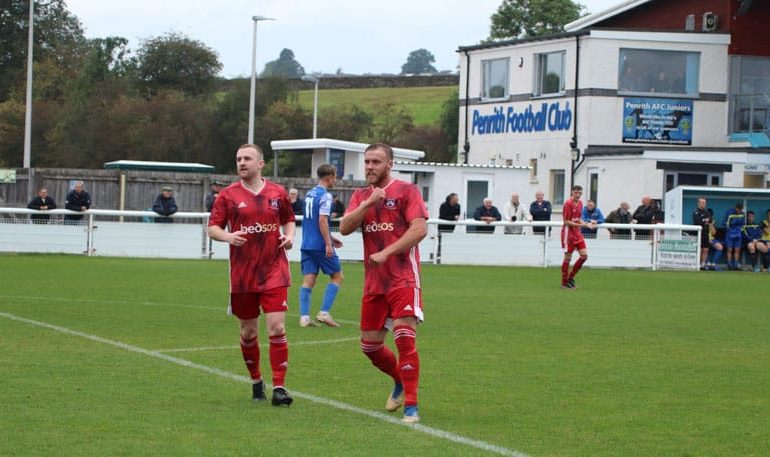 It was raining goals in Penrith as Newton Aycliffe came from behind to score five at the Frenchfield Stadium.

Liam Jarvie scored his seventh goal of the season to cancel out Max Brown’s early opener before midfielder Shaun Ryder gave Colin Stromsoy’s side the lead.

Jack Naylor added a third before the break to give the Newtonians what seemed a comfortable lead before Jamie Armstrong gave the Bonny Blues a lifeline on the hour firing in from close range.

The home side tried to force an unlikely turnaround in the closing stages to no avail as Aycliffe moved up to second in the Ebac Northern League Division One table.

Head coach Stromsoy kept faith in the XI who claimed a 3-1 win over Redcar Athletic seven days ago with Burnicle, Jarvie and Andrei Ardelean leading the line at the Frenchfield.

But it was a sluggish start from the visitors who were almost behind inside four minutes when Kingsley Grandison latched onto Richard Faustino’s throw and was able to roll Callum Munro in the area before firing against Adam Pickford’s cross bar.

And Stromsoy’s side failed to take note of the warning as they did fall behind a minute later when Grandison capitalised on a loose clearance from Aycliffe before finding Brown whose strike deflected off Munro to wrong-foot Pickford and give the hosts the lead.

And the home side came close to a second when Grandison teed up Luke Brown but this time Munro was able to divert over as Grandison nodded wide from the resulting corner.

At last Aycliffe seemed to come into the game and they were level with their first meaningful attack of the game as Jarvie got on the end of Burnicle’s cross to bundled home.

The goal appeared to invigorate Aycliffe who came close to taking the lead through Burnicle but his first time effort was saved by Aaran Taylor.

But the visitors did grab the lead 10 minutes before the break when Nick Green’s cross was headed clear as far as Ryder who shifted the ball onto his left before coolly finding the bottom corner.

Green was provider again three minutes later when he found Naylor through a crowded penalty area and the defender’s strike at goal skipped off Matthew Moynan to beat Taylor in the Penrith goal.

But Aycliffe were slow out the traps again in the second half as Brown latched onto a long ball forward and was able to go around Pickford before Aycliffe captain Aaron Brown cleared the danger.

Jarvie was denied his second of the game by a smart save from Taylor to keep Penrith in the game before the hosts reduced the deficit on the hour.

Brown escaped Ryder down left to find Luke Hunter who was denied by a stunning save from Pickford but the loose ball was hammered home by Armstrong despite Munro’s best efforts on the line.

But Aycliffe showed their resolve by regaining their two goal lead within a minute of the restart.

Green’s quick throw found Wood who exchanged a neat one-two with Jarive before standing a cross up to the back post where Burnicle was on hand to prod home.

Armstrong might have grabbed a third for Penrith moments later when played in on goal but the striker opted against pulling the trigger.

And Stromsoy’s side scored their fifth 15 minutes from time when substitute Coleman, who started the move inside his own half, finished an excellent counter-attack by powering in Jarvie’s through ball.

It was enough to take the sting out of the home side as Aycliffe recorded their fifth straight win in the league to move up to second in the table.

The Newtonians then turn their attention to cup action with Darlington visiting the Beaumont Landscapes Stadium on Tuesday, October 19, in the Durham Challenge Cup.

Aycliffe play the next round of the Buildbase FA Vase on Sunday, October 24, with an away trip to AFC Liverpool. The home side groundshare with Marine who have a home game on the Saturday, therefore the Vase match will be played on the Sunday with a 2pm kick off.