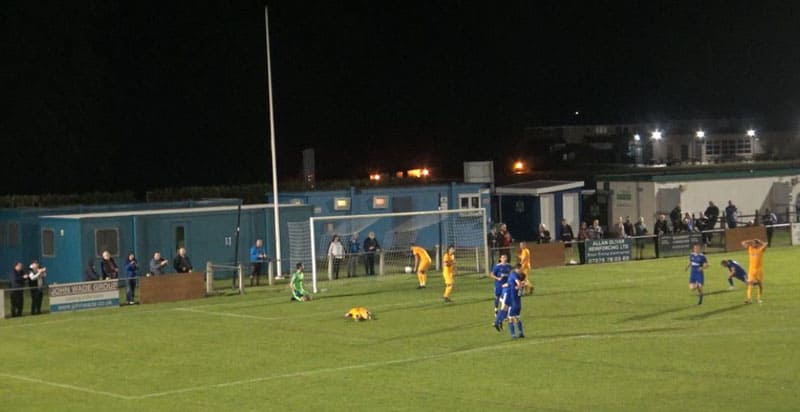 Newton Aycliffe secured their first win of the season in dramatic fashion on Tuesday night with a 3-2 win over Newcastle Benfield.

Ben Reay scored his second goal in as many games with two minutes remaining to cap a thrilling night at the Beaumont Landscapes Stadium.

Jake Petitjean had given the hosts the lead midway through the first half but they found themselves behind at the interval after Cyril Giraud added to a Lucas Pilling own goal to put Benfield in front.

Man-of-the-match Ethan Wood levelled the scores once more early in the second half with a wonderful strike from outside the area before Reay pounced from eight yards to seal a remarkable turnaround.

Colin Stromsoy surprised many before the game with six changes to his starting line-up following Saturday’s 1-1 draw with Shildon.

Goal scorer Reay was perhaps unfortunate to find himself on the bench as Ben Dibb-Fuller, Arran Wearmouth, Adam Burnicle, Pilling, Aidan McGee and Connor Phelan all made a return to the starting XI.

Veteran striker Paul Brayson led the line for the Lions who arrived at Moore Lane with a 100% league record but it was Aycliffe who started the better of the teams with the new-look front three all linking up.

Wearmouth found Burnicle who laid it off for Dibb-Fuller but his low strike was pushed wide by Andrew Grainger.

Benfield began to find a foot in the game after the opening 10 minutes and should have taken the lead in the 15th minute when Giraud was sent clear by Reece Noble’s pinpoint through ball. Giraud had time to pick his spot but pushed his effort wide of Adam Pickford’s post.

Two minutes later though and the deadlock was broken as the hosts caught the Lions napping from a set piece. Pilling’s in-swinging free-kick from the right was measured to perfection and found Petitjean at the back post who sent the ball back across goal beyond Grainger.

The lead was almost doubled just after the half hour mark when Burnicle’s lofted pass found the onrushing Dibb-Fuller but his effort was excellently diverted past the near post with the goalkeeper helpless.

It was a chance Aycliffe were made to regret as from the resulting corner Benfield were able to break away eventually finding Mark Turnbull on the right and his cross was diverted into his own net by Pilling giving Pickford no chance.

With the scores level the game hit a lull as Wearmouth and Turnbull came to blows on two occasions with both fortunate to escape a booking from referee Craig Dean.

But just as the sides looked set to head into the interval all square Wearmouth’s misplaced back pass was read by Brayson who latched onto it and forced a smart save from Pickford.

Unfortunately for the Aycliffe stopper his save fell into the path of Giraud on the edge of the area and this time the striker found his target placing the ball beyond the goalkeeper to give Benfield the lead.

The introduction of Liam Jarvie for Dibb-Fuller at the break had Aycliffe immediately on the front foot and they didn’t have to wait long before they found themselves back on terms.

Wood found the ball on the right of the area and was allowed to advance inside before unleashing a tremendous effort which fizzed into the far corner of Grainger’s goal.

The lively Jarvie was causing the Benfield defence cause for concern as Aycliffe started to dominate the game and it was Burnicle who came within a whisker of diverting Jarvie’s cross in the 55th minute.

Jarvie and Wearmouth both tested Grainger from range before Burnicle created space for himself in the area but fired over on his left.

The arrival of Reay with 15 minutes to go kept Aycliffe on the front foot as Jarvie once more had an opening in the penalty area but he poked his effort over the bar.

Benfield, who had been kept on the back foot for most of the second half, almost made the hosts pay once more with eight minutes to go when Alex Nisbet found himself unmarked from Noble’s freekick but the midfielder blazed his effort over the bar.

Despite Aycliffe’s efforts it seemed they were heading for their third successive draw before Jarvie was able to scramble a pass into the path of Reay who made no mistake from close range to put the home side back in front and seal their first win of the season.