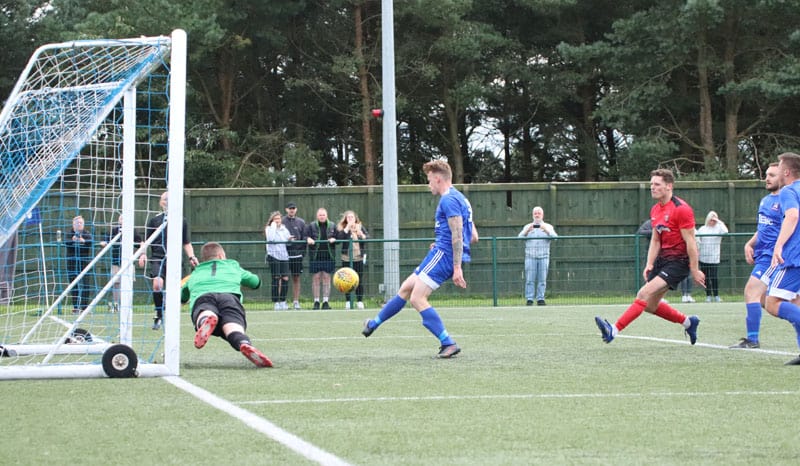 Newton Aycliffe’s dramatic start to the Ebac Northern League season continued against Consett on Saturday with Colin Stromsoy’s side coming out on top in yet another high scoring game.

Liam Jarvie gave Aycliffe the lead two minutes before the break and it was a lead the visitors would hold until five minutes from time when Colin Larkin’s equaliser sparked the beginning of a remarkable finale at the Belle View Stadium.

With Stromsoy’s men having to remain resilient Jake Petitjean earned a stoppage time penalty which Sonni Coleman was to miss before converting the rebound (captured above by Yvonne Wood) to re-establish the Newtonians lead.

Two minutes later and Consett fullback Darren Holden was dismissed for an apparent stamp on stand-in defender Shaun Ryder with referee Mark Ryan in no doubt as he brandished a straight red card.

The icing looked to have then been put on the cake as a combination of Ben Wood, Coleman and Ethan Wood put Consett goalkeeper Kyle Hayes under pressure forcing the number one into a mistake to give Coleman the simple task of rolling the ball into an empty net to extend the advantage in the fifth minute of added on time.

But the hosts were still able to manage a consolation from the penalty spot in the 97th minute after Dale Pearson was brought down in the area with the frontman picking himself up to slot beyond Adam Pickford.

Pearson’s celebrations were cut short by the referee’s full-time whistle as Aycliffe moved to the top of the Division One table with four wins from four.

Stromsoy made one change from the side who claimed all three points over Newcastle Benfield in midweek with Marc Costello replacing Joe Ferguson who struggled during the warm-up.

And the Newtonians were given a warning shot inside 20 seconds from the lively Luke Carr who fired over from range before Jake Orrell gave Pickford something to think about moments later.

Jarvie tried a snap shot from the edge of the area eight minutes in but was off target as the visitors began to settle into the cauldron of Belle View Stadium in front of over 500 spectators.

Stromsoy’s side began to dictate proceedings for spells of the first half before Pearson dragged wide of Pickford’s post on the half hour mark after good play from Carr and Callum Guy.

But just as it looked as though there’d be nothing between the sides going into the interval Lewis Walton floated a deep cross in from the left which was cleared into the path of Jarvie who made no mistake in volleying into the bottom corner for his fifth goal in a week to give Aycliffe the advantage.

And it was Jarvie with the first sight of goal in the second half too when he dragged wide of Hayes’ post before Pickford was called into action with a stunning save to palm Carr’s goalbound effort over the bar.

But Stromsoy’s side reacted once more and it was Jarvie again who found a pocket of space in front of the defence curling narrowly wide of Hayes’ post with the goalkeeper stranded.

Backed by a vocal home crowd Aycliffe were let off the hook in the 70th minute when substitute Daniel Marriott found Pearson on the edge of the area who cleverly backheeled a ball into the path of Carr from eight yards but he placed his effort beyond Pickford’s right-hand post.

Seven minutes later though and it was Aycliffe’s players with their hands on their heads after Ben Dibb-Fuller worked the ball to Petitjean on the edge of the area with the midfielder looking as though he was going to shoot instead freeing the onrushing Ryder down the right who drilled his effort just wide of the far post.

With the game on a knife edge the Newtonian’s resistance was broken five minutes from time when Pearson cut in from the left to find Marriott and his strike was parried into the path of Larkin inside the six yard box who made no mistake in finding the equaliser for the Steelmen.

And Larkin almost flipped the game on its head moments later when Marriott’s cross from the left escaped everybody and fell to him as he brought another excellent save out of Pickford to keep the scores level.

But as the game entered stoppage time Aycliffe worked the ball down the right from a throw-in with Ryder’s cross searching for Petitjean who was sent tumbling by Jermaine Metz.

Coleman stepped up looking to convert his third spot kick of the season but was thwarted by Hayes momentarily as the rebound fell kindly back for Coleman to prod home and hand Aycliffe a priceless lead.

Two minutes later and Consett were reduced to 10 men when Holden came down heavy with both feet on Ryder with referee Ryan deeming the incident a straight red card.

Instead of sitting back Stromsoy’s men continued to press the Consett back line and forced an unlikely error out of goalkeeper Hayes in the fifth minute of stoppage time after he had dribbled the ball out of the area.

Wood was able to get a toe on it to release Coleman who stroked the ball into the empty net and all but seal the win.

The final attack of the game saw Pearson retrieve a loose ball in the box before being brought down and despite him converting from 12-yards Aycliffe were able to hang on to seal a remarkable three points.

After a midweek trip to Seaham Aycliffe return to Emirates FA Cup action on Saturday, August 21. They visit Tadcaster Albion who play one league higher than the Newtonians.

Aycliffe return to the Beaumont Landscapes Stadium on Tuesday, August 24, when Crook Town will be the visitors (ko 7:45pm).