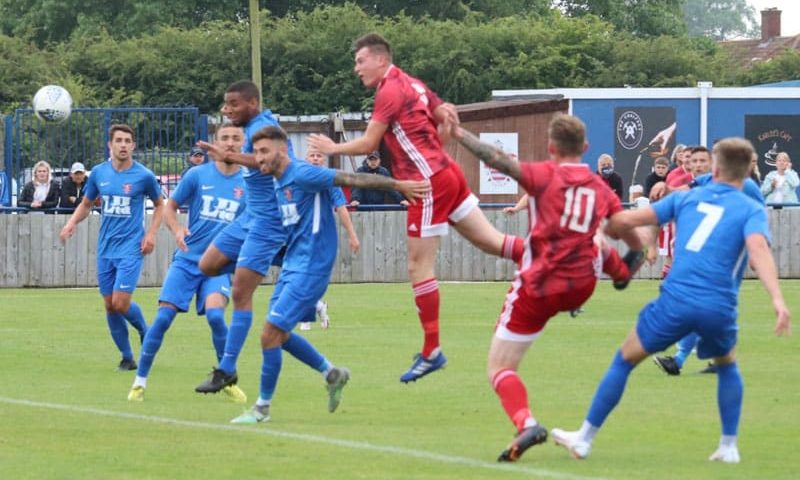 Newton Aycliffe opened their Ebac Northern League Division One campaign in pulsating style with a dramatic win over Billingham Town.

Jake Petitjean and substitute Ben Dibb-Fuller both scored twice as new signing Sonni Coleman scored on his debut from the penalty spot to seal a 5-2 win at Bedford Terrace.

Harrison Webster had gotten the home side back into the game before half-time with former Aycliffe man Danny Earl adding a consolation nine minutes from time.

Referee Alex Clark showed Adam Burnicle a red card 17 minutes from the end for a coming together with Daniel Boyle which caused tensions to spill over somewhat between both sides following a tackle involving Petitjean and Boyle.

There were three debutants in the Aycliffe XI with Coleman leading the line and Alex Walker and John Jury starting in defence.

And it didn’t take long for the visitors to find their stride as midfielder Petitjean picked up where he left off last season by opening his account for the new campaign in the 10th minute.

Lewis Walton’s corner from the right was cleared as far as Boyle who was robbed by Marc Costello to find Walton once more and the fullback expertly picked out Petitjean who made no mistake from eight yards heading beyond Michael Roxburgh.

The lead lasted just 15 minutes though as Earl’s quick freekick on the right caught out the Aycliffe defence finding Boyle who cutback to Ashley Lavan on the edge of the area and his effort was deflected onto the post only for Webster to stab in the rebound on the line.

Webster came close to giving the hosts the advantage eight minutes later when he volleyed wide of Adam Pickford’s angle from Joseph Taylor’s cross before Walker almost capped a dream debut for Colin Stromsoy’s side when he headed narrowly over from Ethan Wood’s freekick.

But the visitors did take the lead through another summer signing in Coleman before the half was out as the striker, signed from Guisborough Town, confidently dispatched from the penalty spot after Petitjean was brought down by Taylor four minutes from the interval.

Roxburgh guessed the right way in the Billingham goal but there was no stopping Coleman’s effort as Aycliffe took the lead into the break.

It is a lead that could have been extended inside two minutes of the restart as Liam Jarvie latched onto Petitjean’s header but Roxburgh was out quick to smother.

Burnicle brought out an excellent save from the Town keeper just after the hour before substitute Dibb-Fuller looked to have sealed the points by adding a superb third from range.

The midfielder picked up a loose ball from 25-yards and was able to skip past Boyle before unleashing a wicked strike with his left foot which arrowed into the corner.

Two minutes later and Aycliffe’s lead didn’t look as commanding after Burnicle was given his marching orders after a coming together following Boyle and Petitjean’s robust challenge.

But the disadvantage of being a man down didn’t impact the Newtonians as Coleman almost added his second of the game from the resulting freekick when Costello’s pressure saw the ball land at the feet of the striker but Joseph Carter was on hand to make a crucial interception and divert behind for a corner.

The clincher came from that corner however as Dibb-Fuller’s cross was scrambled clear only as far as Petitjean who sent a rasping half volley into the top corner.

The home side never gave up though and gave themselves a glimmer of hope nine minutes from time when Ryan Gooch slid the ball across for Earl to tap underneath Pickford to reduce the deficit to two.

But with Billingham pushing for a third it was Aycliffe who grabbed another goal when Dibb-Fuller’s excellent pressing forced Lavan into a mistake and he exchanged passes with Coleman before cleverly dinking the ball over the on-rushing Roxburgh to cap a remarkable opening afternoon.

Following a midweek trip to Bishop Auckland Aycliffe’s attention turns to the Emirates FA Cup. Thornaby are the visitors to the Beaumont Landscapes Stadium on Saturday, August 7 (ko 3pm). Admission is £7 adults, £5 concessions, £3 under 16s.

The winners of that game travel to Tadcaster Albion in the Preliminary Round on August 21.