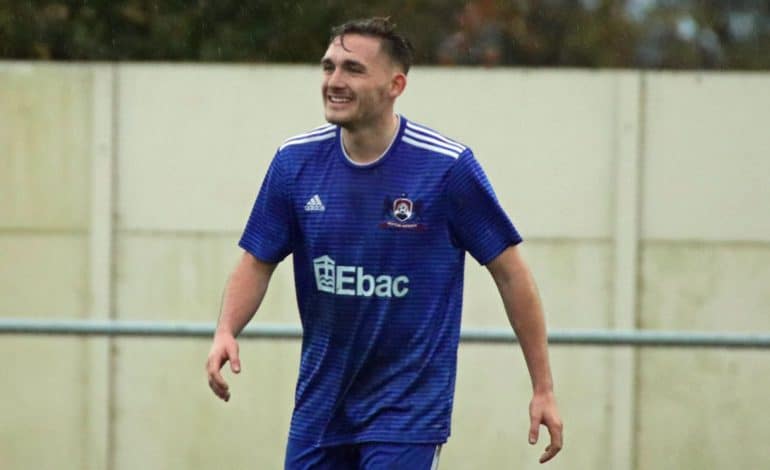 Newton Aycliffe came from behind but were held at home to Whickham on a frustrating afternoon at the Beaumont Landscapes Stadium.

Scott Robson gave the Lang Jacks the lead with a speculative strike from range early in the second half before Lewis Walton slid in at the back post to convert Nick Green’s pinpoint cross just after the hour.

Aycliffe had chances to win the game as the half went on and were denied what looked a clear cut penalty 12 minutes from time when Ben Reay was brought down by Regan Ward having gone around the goalkeeper but referee Derric Wade was unmoved.

There were two changes to Colin Stromsoy’s line-up from the team who lost at Whitley Bay in midweek with Nick Green replacing Connor Phelan at fullback and Arran Wearmouth coming into the attack ahead of Ben Dibb-Fuller.

Quick to put Tuesday night’s defeat behind them Aycliffe made a fast start when Adam Burnicle looked to capitalise on Charlie Exley’s missed clearance in the fifth minute as the striker forced a smart stop from Ward at his near post.

Burnicle saw a goal disallowed midway through the first half adjudged to be offside from Liam Jarvie’s cute ball after a slick passing move from the home side.

Jake Petitjean got on the end of Walton’s freekick from the right but his header wasn’t troubling Ward.

The best chance of the first half came to Jarvie on the half hour when broke the offside trap from Wearmouth’s pass and was able to cut inside of Liam Doyle but his low strike was blocked by the legs of Ward.

Conor Newton found himself in the sin-bin for the visitors just before the break for continuing his remonstrations with referee Wade before Jarvie dragged a cross-come-shot wide after a well worked corner.

A 45 minutes low on quality was brought to an end with Aycliffe perhaps the better side as the scores remained goalless.

Wearmouth got on the end of an excellent Green cross two minutes after the restart and might have done better but his header went narrowly wide of the post.

Two minutes later and some inside the Beaumont Landscapes Stadium thought Jarive had given Aycliffe the lead after he latched onto Petitjean’s through ball but the frontman lashed his effort into the side netting.

Despite offering little up to that point in front of goal it was Whickham who found themselves in the lead in the 55th minute when Doyle forced Ethan Wood into a misplaced pass that fell at the feet of Robson just inside the Aycliffe half.

Robson was allowed to advance to the edge of the Aycliffe penalty area where he took aim and arrowed a rasping strike into the top corner beyond the outstretched Adam Pickford.

Stromsoy brought on Dibb-Fuller for Wearmouth in response to going behind and the home side were level within eight minutes.

Aaron Brown and Marc Costello stretched the play out wide to find Green who sent a delightful cross over to his opposite fullback Walton who was able to force the ball in at Ward’s near post.

It was Aycliffe who looked the more likely to get a winner and in the 78th minute they thought they had the opportunity when Reay managed to poke the ball past Ward who spread himself and appeared to bring the forward down but the referee waved away the strong protests.

Mohammed came off the bench to make his debut for the club five minutes from time in an effort to find a winner and it almost came when Reay found Burnicle inside the penalty area but his first time effort went the wrong side of the post as Whickham held on to claim a share of the spoils.

• Aycliffe have a tough game on Tuesday (Oct 27) when Consett visit the Beaumont Landscapes Stadium.

The Newtonians then have a trip to Liverpool on Saturday in the Buildbase FA Vase. Colin Stromsoy’s men will play Lower Breck of the North West Counties League. Although the game is not ‘behind closed doors’ Aycliffe don’t have a ticket allocation as govt / FA strongly advise that spectators should not travel into a Tier 3 area.