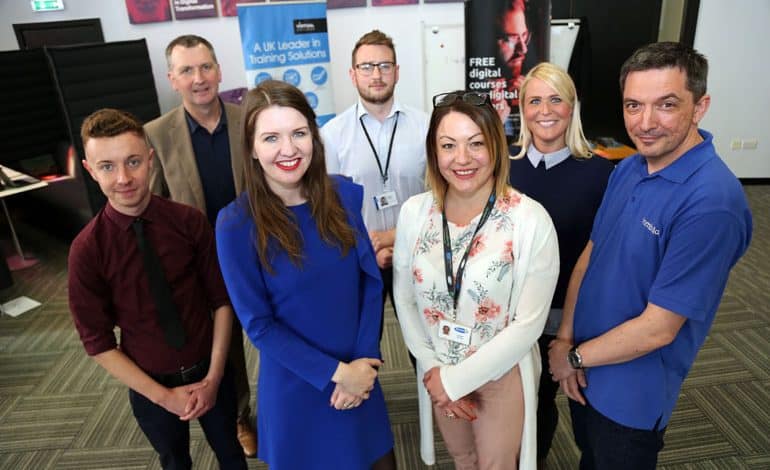 Businesses looking to recruit young people in digital and IT, including two from Newton Aycliffe, have benefited from a successful careers fair held in Durham city.

Aycliffe-based Baltic Training and Virtual College were among the exhibitors at the event held in the Rivergreen Centre at Aykley Heads in Durham.

Almost 200 young people got to find out more information about digital and IT career opportunities from around 20 exhibitors during the four-hour event, which also included a series of presentations from experienced professionals in the digital sector.

At least 100 jobs were available from the companies in attendance which included Sunderland-based Tombola and Durham-based Atom Bank, as well as Media Works, QA Apprenticeships, Sunderland and Teesside universities and Aycliffe firms Baltic Training and Virtual College, among others.

Neil Guy, head of international operations at Tombola, which is expanding with a new HQ in Sunderland, said: “Businesses are screaming out for IT and digital staff.

“We’re now looking to recruit degree apprentices, taking young people from school and college and hopefully keep them for 10 years or more, because of the skills shortage.

“It’s such a big growth area with lots of opportunities, so events like this are really valuable. It has given us an opportunity to get in front of young people who are interested in a career in IT.”

Jayne Parsley, head of communications at Newcastle-based national marketing agency Media Works, said: “We’ve had lots of interest from the people attending, and received lots of CVs, so it’s very much been a worthwhile exercise for us.

“We’re passionate about keeping local talent within the local community. Luckily we have five amazing universities here in the North-East, and it would be such a shame to see that talent leave our region. We want the passion and expertise from young people to stay here.”

Two aspiring IT professionals who attended the careers fair, Kayleigh Lowdon and Nicolai Frampton, both lined up interviews with Atom Bank, the UK’s first digital-only bank, during the careers fair.

Kayleigh said: “I’m interested in pursuing a career in digital marketing and social media, and maybe graphic design, but it was surprising to learn how many different avenues there are within the digital and IT sector.

“There are a lot of opportunities and it was a great chance to get to speak to businesses face to face, with at least one interview straight away which is fantastic.”

Joanna Wake, managing director of the event organisers RAW Digital, said: “We’ve brought together businesses looking to recruit people in IT, and young people looking for a career in that sector, so it’s been a fantastic event which everyone involved has benefited from.

“We’ve seen an energy and buzz from the providers but, more importantly, we’ll see young people ending up with the type of jobs they’ve been looking for but maybe couldn’t find, which will ultimately give us all a buzz.”

Joint-organisers DurhamWorks, a partnership project led by Durham County Council and part funded by the European Social Fund and Youth Employment Initiative, has now supported more than 4,000 people between the ages of 16 to 24 to become ‘work ready’.

The programme works with a range of partners to help unemployed young people develop their existing skills, identify new ones and help them into a range of training, job and education opportunities.

Danielle Barnes from DurhamWorks said: “The digital sector is one of our main growing industries in this region – it’s increased by 26% in the last couple of years – but the opportunities out there aren’t reaching our young people.

“So it’s a vitally important sector within our programme of works and this event was about reaching out to those people and making them understand the full spectrum of career paths that are available to them.”