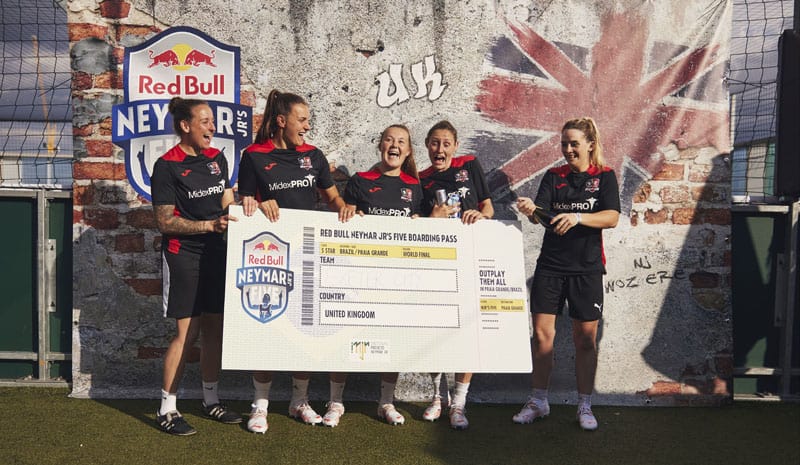 Newton Aycliffe-based Harrison Creative has secured its first contract with Red Bull and supplied signage and branding for the UK national final of its Neymar Jr’s Five football tournament.

Harrison Creative provided a range of products for the global five-a-side football competition, which offers the winning team the chance to play against Brazil and Paris-Saint-Germain footballer, Neymar Jr.

This included supplying ‘ticket to Brazil’ and ‘Neymar Jr’s Five’ logo boards for the London leg of the event, as well as branded pitch side boards and scoring numbers from its eco-friendly range of temporary signage products.

The business also provided the competition scoreboard, 47 kickboards and eight vinyl cut out arrows for the competition, which recently took place in Battersea.

Now in its fifth year, the Red Bull Neymar Jr’s Five tournament sees teams from 40 countries compete to become the national champion in their respective nations.

National champions then qualify for the world final in Praia Grande, Brazil, where they compete to become world champion. The winning team then gets the opportunity to play against Neymar Jr’s team.

Harrison Creative sales and marketing director, Anthony Leonard, said: “The Red Bull Neymar Jr’s Five tournament is a fantastic event and a key date in the calendar for amateur footballers across the globe.

“We are really pleased to have been involved in the event this year, providing a wide range of branding and signage to help make the UK final a memorable event for all the teams involved.

“It has been great to work with Red Bull for the first time on this event and we look forward to working with them again in the future to provide the high-quality branding and signage they need.”

Founded in 2011, Harrison Creative is part of the Harrison Group, which also includes Harrison Flagpoles, Harrison EDS and Pollite.

The business operates nationally and internationally from its headquarters and manufacturing facility on Aycliffe Business Park.