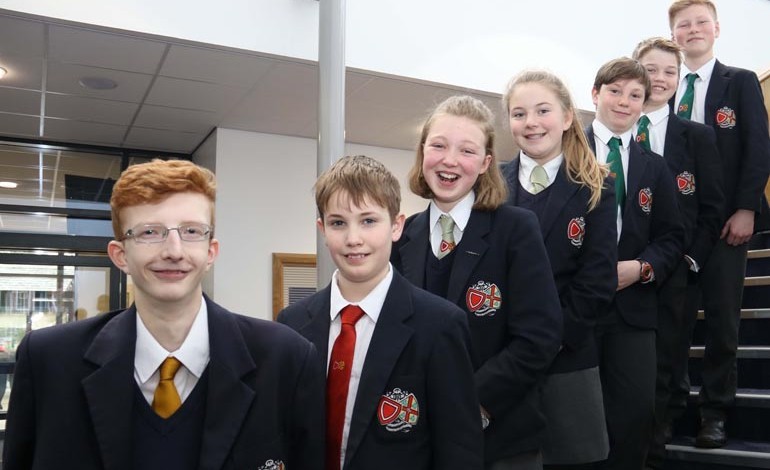 Newton Aycliffe shower manufacturer Roman is a business mentor for a team of Year 8 entrepreneurial students who have been inspired by the plight of a classmate who is fighting to overcome genetic health issues that involved major surgery.

Roman has teamed up with a group of Year 8s from Barnard Castle School in the Future Business Magnates contest, run by Business Durham, the economic development company for County Durham.

Future Business Magnates is a fun competition with an important business message, now in its 11th year.

It involves 20 schools around County Durham, each partnering with a local business, who help the 12 and 13 year olds come up with an innovative product and to create a business plan around that.

Teams are awarded points for a variety of challenges during the competition and the results are published in a league table with Barnard Castle School currently in second place.

The team includes Mark Nicholson who was born with Marfan syndrome, a condition that left him with a badly twisted spine and severely restricted chest cavity affecting his heart and breathing.

The teenager recently underwent surgery at Great Ormond Street Hospital in London in which two titanium bars and 27 screws were inserted to straighten his spine, a move that saw him grow 10cm in height, while his chest was completely reconstructed.

Mark is now part of the team of budding entrepreneurs topping the tables in a prestigious design competition in which they have developed a new way of showering aimed to suit the whole family throughout their lives.

It particularly addressed the problems facing the increasing elderly population and for those with disabilities whilst still looking stylish.

Mark said: “My condition did get us all thinking of designing something that could be useful to people with disabilities and those who haven’t, which our seat is.

“Roman has been great and provides us with some excellent advice and resources to develop our prototype.”

The team’s idea is an innovative shower seat system and they have produced three variations, one of which can be inserted into a standard shower enclosure; a complete shower enclosure pod system with the stylish seat integrated; and a deluxe version that features Wi-Fi and speakers.

Roman boss David Osborne added: “We are thrilled to be Barnard Castle School’s business partner in this exciting initiative.

“The team’s enthusiasm and eagerness to learn is inspiring to see and it has been a great pleasure to help and guide them through their various business challenges and we wish them luck in the final next month.”