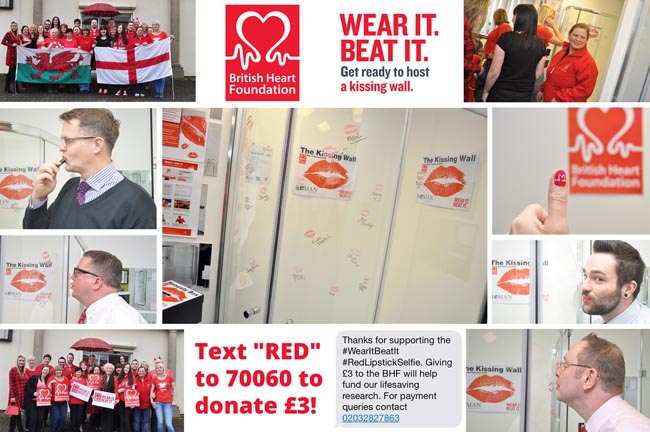 Newton Aycliffe shower manufacturer Roman has got involved and showed their support for the British Heart Foundation’s Wear It Beat It Campaign.

The staff at Roman showed their support for the fantastic cause by wearing red, whether that be red shoes, red tie, red lipstick, Welsh Rugby Shirt or English (change strip!).

Managing Director, David Osborne, and many other rugby fans in Roman proudly wore their red tops to support the British Heart Foundation and of course the first game of the Six Nations, England vs Wales.

Roman also set up a kissing wall on one of their Quadrant Shower Enclosures.

Staff put on some red lipstick (including the men!) and kissed the Shower Enclosure, then signed their name to show they are in full support of the campaign. Roman received many generous donations from their employees, and their friends and family members to help fund lifesaving research.

Mr Osborne said: “Here at Roman our staff jump at the chance to take part in raising money for worthy causes, such as the British Heart Foundation.

“Rugby is also a big passion of ours so wearing red to support both causes on Friday was an extremely popular choice of clothing in our factory and offices!”