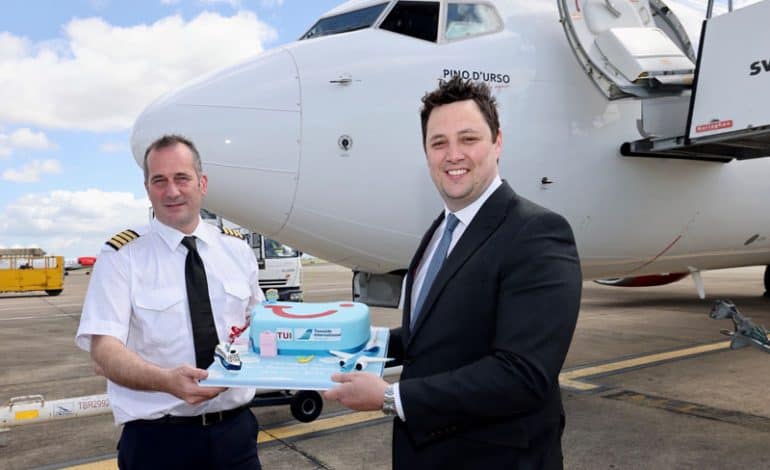 TUI, the UK’s biggest holiday firm, has welcomed its first Teesside Airport passengers in nine years as it launched its summer breaks to Majorca – including a young family from Newton Aycliffe.

The first flight, which was fully booked, jetted out of the airport to Palma on Tuesday afternoon, joining the airport’s busiest schedule since 2013 – the last time TUI touched down.

The service runs every Tuesday, providing brilliant breaks to the island, famed for its golden sands, waterfront villages and exciting nightlife.

It will also give people flying from Teesside access to four Marella Cruises sailing itineraries, including Coastal Gems, Treasures of the Mediterranean, Magic of Spain and Mediterranean Medley, all on Marella Discovery.

Ashleigh Graham, Kristian Graham and their two-year-old son, Luka, were some of the first passengers jetting out on the TUI service.

The Aycliffe couple said: “This is our first time travelling from Teesside Airport and we’ve had a fantastic experience so far.

“It feels like a family-run airport and the bar staff have been great.”

Peter and Shirley Upton used to fly from Teesside back in the 1970s and 1980s and this was the first time using it for a long time. They praised the new-look terminal and pointed to its “great atmosphere” as a reason why they are hoping to travel from Teesside again later this year.

Mother and daughters Mary Jackson, Karen Lister and Denise Wood were on their first trip together in three years due to the pandemic, and this was their first time using the airport in more than a decade.

Karen said: “We’ve had a great experience and we’re excited to travel with TUI. I’m even looking forward to coming home because I’ve only got a 20-minute journey back to my house – that travel can usually be a nightmare!”

TUI is also running a programme of flights from the airport in 2023, with tickets on sale now.

Tees Valley mayor Ben Houchen (pictured above) said: “After such a difficult time for the aviation industry as a whole – with airports reporting £10billion losses since March 2020 – it’s fantastic to now see our terminal packed one again and have TUI back on board.

“The fact that today’s flight was absolutely packed out shows how excited people are to have the service back and future bookings are looking just as encouraging.

“TUI has also committed to 2023 too, and we’ll never stop working to secure more of the flights people want to see.

“The only reason we’ve been able to secure the routes we have is thanks to people from across Teesside, Darlington and Hartlepool showing their support – and thanks to our multimillion-pound terminal redevelopment, it’s smoother and quicker than ever to use your local airport to get away on a well-deserved break.”

Karen Switzer, Director of Aviation Planning at TUI, said: “We’re delighted to be taking our customers on holiday from Teesside International Airport once again after so many years.

“Our flights mean people local to Teesside have more options for getting away to enjoy a well-deserved break more quickly and easily, with access to a great range of hotel concepts and cruise holiday options.”