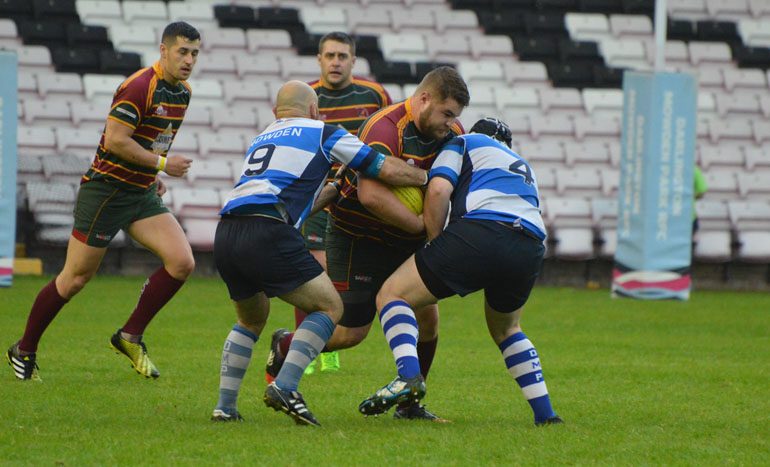 The game was played as the final part of Mowden Park’s ‘Dawn’til dusk’ full day of rugby which was organised to support Luke Bell, who is the son of Mowden 3rd XV Captain Mark (Tank) Bell. 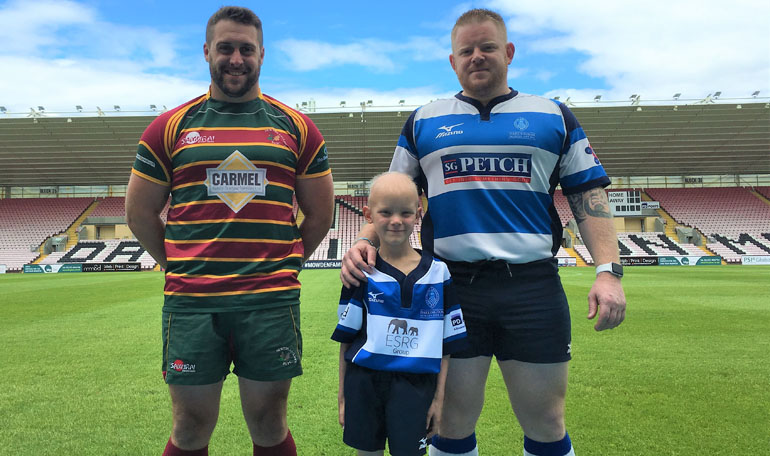 Luke has been diagnosed with High Risk Neuroblastoma which is an extremely rare form of cancer affecting less than 100 children a year. N.A.R.U.F.C. travelled with a 20 man First XV squad and the game gave the First XV some real positives and some key areas to work on ahead of their first cup game against Sunderland, to be played on 26th August at Moore lane, which is followed the next week by the first league game of the season vs Winlaton Vulcans, also at Moore lane.

The team arrived well in advance of the 6pm kick off, and underwent a solid warm up led by player and S&C coach Ash Bolsover.

There was some gamesmanship from DMP who sent the visitors to warm up at the opposite end of the pitch where a fancy dress game of touch was taking place. The pack and back division then split and worked on set piece and moves respectively, with both looking sharp ahead of kick off. There was then time to return to the changing rooms before the knock came for the First XV to head out and provide a guard of honour for Luke who would be leading the teams out onto the pitch.

Aycliffe had won the toss and elected to kick off, with Lewis Stephens stepping up to get the game underway. 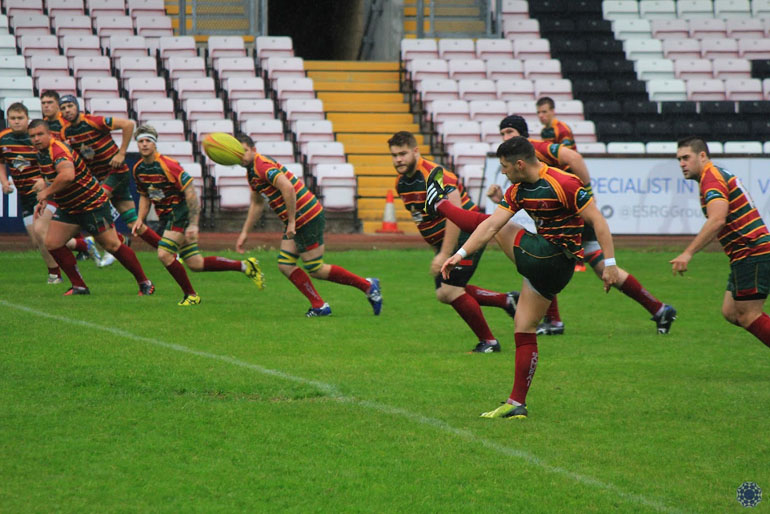 Stephens aimed for a short kick off, but the unpredictable swirling stadium wind buffeted the ball back, causing it not to travel ten metres, and giving DMP the scrum on halfway.

As DMP forged forward from the scrummage, flanker Ash Bolsover threw himself into the fray to slow the advance, but dislocated his shoulder in the tackle, having to be taken to hospital for treatment. Whilst the visitors felt the loss of the experienced flanker, his replacement Jamie Whelan added impetus from the off, hitting tackles and rucks with real purpose and making an immediate impact.

Despite Aycliffe’s efforts, the first half continued with DMP maintaining possession, and gaining the upper hand over the visitors who seemed somewhat hesitant. DMP worked hard around the corner tight in to the breakdown, and despite ferocious tackling from Aycliffe, DMP crossed twice in the first twenty minutes, taking the score to 14-0.

Aycliffe managed to put together a few good attacking shapes and came close to scoring but unforced errors cost them dearly, with DMP crossing for a third try.

Aycliffe again forced their way up the field, but another unforced error saw DMP capitalise once more, taking another try on 30 minutes. Aycliffe surged forward from the restart, pinning the home team back into their own twenty two, and forcing a penalty, which Captain Alex Lineton elected to kick, and converted into three points just before half time.

The return to the changing rooms at half time saw a rousing team talk from the coaching staff, with Aycliffe bursting back onto the pitch intent to give a proper account of themselves.

The visitors started well, immediately pushing forward into the Mowden half, but again the unforced errors cost Aycliffe, knock ons in the wet conditions costing them dearly.

Again the home side pressed forward through hard work around the corner, working their way into a position from which they kicked a great touch finder giving them a lineout on the five metre line, which was driven over.

Not content with the score, Aycliffe again pushed deep into the Mowden half, setting their own lineout ten metres from the line, despite an excellent take by Luke Harty, and what appeared to be an inexorable drive, the maul was taken down and Aycliffe were alleged to have given the penalty, allowing Mowden to regain some much-needed territory.

Aycliffe were the next to strike, with some strong work from the pack tying in the Mowden pack, which allowed the backline to take on the defence man for man, a slight of hand from Captain Lineton created space and a deft step from Lewis Stephens beat the last man, with the twelve crossing to give the visitors their first try of the game the extras added by Captain Lineton.

Aycliffe continued to pressure the home side, and looked set to make a comeback, but the referee judged a forward pass to have been given in the last pass of the move, and the try was disallowed.

Aycliffe continued to pressure the home defence, but the score remained the same.