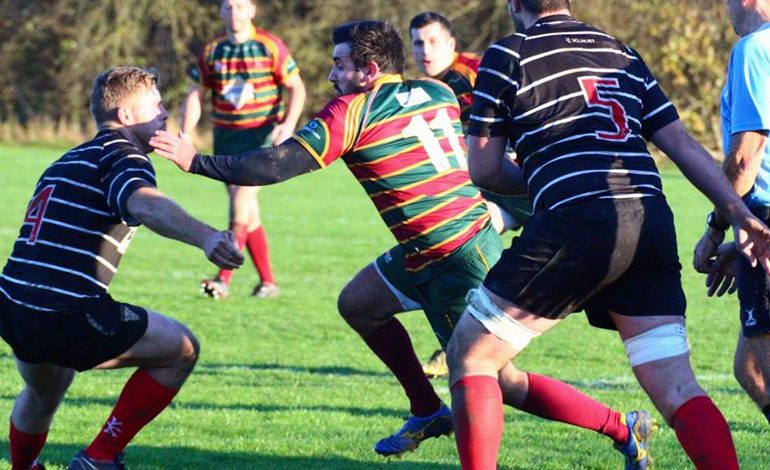 Newton Aycliffe’s losing streak continued with a home loss to a strong Darlington side.

Aycliffe took to the field with their strongest squad this season, including the recently returned from injury Aaron Arkley, who made his debut in the 10 shirt.

The game started well, with Aycliffe pressuring their kick off and holding Darlington firmly within their own half. Having no luck in tight to the rucks, or in the scrummage, the visitors were forced out wide and worked a set piece move which gave them an overlap, which they exploited, taking them into an early lead on five minutes. Having not been able to add the extras, Darlington pressed forward from the restart, drawing play wide, before switching the play and leaving Ayciffe’s midfield standing, crossing under the posts on seven minutes, which was converted taking them twelve points ahead.

Aycliffe knew they would have to respond, or risk the game slipping away from them. Fearing a repeat of the last few weeks, the home side worked the corner hard, carrying well and allowing Aaron Arkley to kick for space. This pressure told on twelve minutes, with a solid backline move drawing in the defence and allowing James Thacker to cut through, converted by Arkley to take the home side within five points.

Both sides then elected to play safe rugby, with neither looking like taking control, until on twenty minutes, the visitors struck once more, working the ball to their hard carrying 13 who hit a line, breaking an Aycliffe tackle to cross. Aycliffe were quick to respond, with strong work from the restart by the tight five giving a good platform for the backs to work with. Adam Gascoigne profited from a well-executed set move, cutting back inside and beating his opposite number to cross, which was converted by Aaron Arkley, taking the home side to within three points.

Aycliffe applied the pressure, making good progress upfield before Jon McGuigan picked and went from a ruck ten out, and barged through five defenders to cross, taking the home side into their first lead of the day. Inspired by their new lead, Aycliffe took it to Darlington, with big hits raining in on the visitors, one of which, from centre Lewis Stephens, hit the 10 so hard he knocked on, and the referee blew for half time.

Aycliffe returned to the field unlike the visitors, with no changes, and the fresh legs told as Darlington immediately broke the line, crossing to take back the lead, which was converted giving a six point cushion. The home side were unmoved, and continued their excellent work in defence, Matthew Wiper once more leading from the front as he put a big shot in on the Darlington 10.

Aycliffe wrestled with the big Darlington pack, with the front row of Jamie Whelan, Alfie Wilson and Linden Dixon not giving an inch in the scrummage or open play. This pressure told as Thacker cut through once more, stopping short and popping to Jon McGuigan who forced his way to the line and crashed over, taking the scores level. McGuigan struck again within five minutes, this time taking a well-timed pass from the midfield to cross out wide and take the home side into another lead.

Tellingly, it was the visitors who struck next, again forcing their way over, which, with the conversion gave them a two-point lead with 12 minutes on the clock. The home side forced two penalties in quick succession, with returning Captain Alex Lineton electing for posts, but pulling one wide and one falling short. The final play of the game saw the visitors give the penalty, and again Lineton indicated the posts and stepped up, hitting the ball sweetly the whole club willed the ball over, but it drifted just wide and bounced dead.