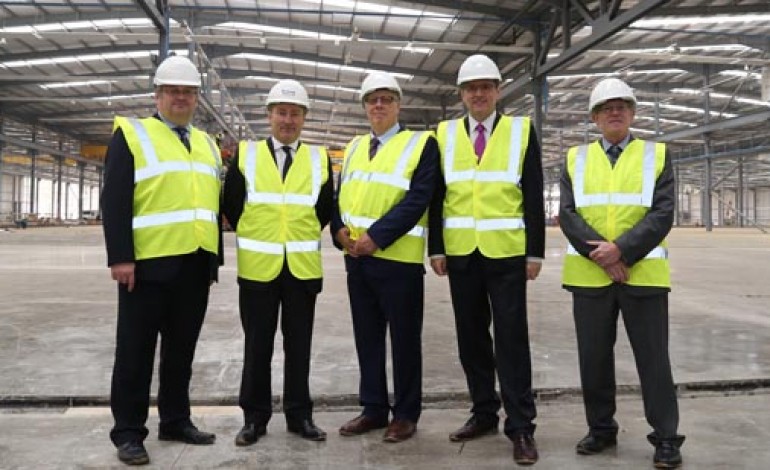 Hitachi Rail Europe has announced that its state-of-the-art Newton Aycliffe factory will house the company’s UK design office, as another important milestone was celebrated.

The Japanese giants hosted a “topping out” ceremony at its Aycliffe Business Park facility on Thursday, to mark the completion of the building envelope.

Mr Jordan said: “Today’s topping out ceremony signifies a milestone in the construction of our vehicle manufacturing facility in Newton Aycliffe.

“This is no longer just a concept – everybody can see for themselves the sheer scale of the site that will act as the hub for our rail manufacturing work in the UK and across Europe.

“With the establishment of our design division, we further enhance professional opportunities and our commitment here in Newton Aycliffe and the North East of England.

“This will be our UK and European rail centre, where we design and build trains for Great Britain and the rest of Europe.”

Hitachi’s design office will initially comprise of 12 staff, with four design engineers already on board and the remainder of roles now advertised on the Hitachi Rail Europe website.

Initially, the team will be tasked with interior design work for the AT200 trains, including the trains destined for the ScotRail franchise.

The future size and scope of the design office is dependent on future workload.

Currently, the design engineers work from an office facility on Aycliffe Business Park, but will move to the new £82m factory when it’s completed by mid-2015.

Rail Minister Claire Perry MP said: “We are investing record amounts in transforming our railways over the next five years as part of our long-term economic plan, including the delivery of 122 Intercity Express trains to run on the Great Western and East Coast main line routes.

“The new trains will be assembled in Britain at the state-of-the-art factory in Newton Aycliffe and will play a key part in transforming travel for thousands of passengers on some of our busiest rail lines.

“The new factory at Newton Aycliffe will benefit the North East’s economy for years to come, creating hundreds of jobs and apprenticeships and showcasing the fusion of British and Japanese engineering excellence.

“It is great to see railway industry jobs returning to the North East, home of the Stockton-Darlington line where Britain’s railway journey began.”

On site today, guests were invited inside the facility and given an overview of the magnificent progress made so far in the construction process. Each of the hosts of the event was then presented with a ceremonial trowel to mark the occasion.

Once completed, the facility will serve as Hitachi Rail’s facility for train manufacturing and assembly.

It will be the base for the construction of the new Great Western Main Line and East Coast Main Line trains the company is building for the Government’s Intercity Express Programme (IEP), as well as the new AT200 trains for Abellio’s ScotRail franchise.