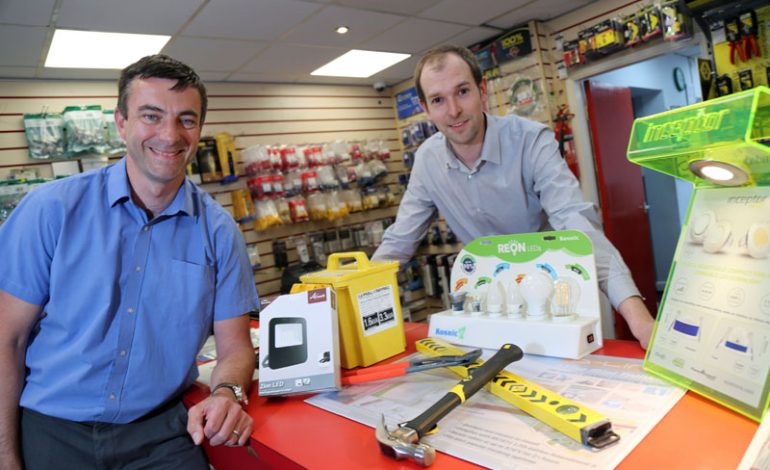 Newton Aycliffe’s only specialist electrical and plumbing wholesaler is aiming for future growth after appointing a new manager.

Craig Slater has returned to Upex Electrical Distributors after 12 years with a national wholesaler.

The 34-year-old, from Newton Aycliffe, has been appointed manager at Upex by managing director Gary Monk, who wants to capitalise on the continued growth of Aycliffe Business Park.

Upex, which has been in business more 30 years, has over 120 regular customers on its books – with around a third of those based in Aycliffe.

But bosses want to win more work from the burgeoning park, and have also appointed a part-time rep to concentrate solely on the immediate area.

And Slater is excited at the prospect of growing Upex after re-joining the firm he’d spent five years with during his first spell.

“Working with people I’ve known for a lot of years and working with Gary and benefiting from his experience in the trade was a big pull,” said Slater.

“I know all the customers in the area and I know Aycliffe inside-out, so it was the whole package.

“Working for an independent firm again is great, it’s more personal, and has more of a family feel to the business.”

Slater is in charge of running Upex’s team of five at Aerial House, next to the Great Aycliffe Council offices on School Aycliffe Lane, and trying to win new business.

He added: “I’m also constantly looking out for new products and always moving with the times.

“There’s massive potential in Aycliffe Business Park – you see new arrivals popping up all the time – and we’re hoping to capitalise on the growth.”

Upex caters for a range of needs, from the man on the street up to large industrial firms, and includes Aycliffe heavyweights such as 3M, Gestamp Tallent and Lidl on its books.

“What we have over national wholesalers is we can usually get our hands on products a lot quicker because our credit and set-up system is a lot less complicated,” says Slater.

“We also have a great breadth of knowledge among our team which means we can solve complex issues for businesses, and usually fairly quickly.

“We often have people in from lots of the well-known firms on the park coming in and asking us to solve problems for them, something which we thrive on.”

Upex is part of the Upex Group – a collection of five companies owned by local entrepreneur John Upex – and as well as a strong Aycliffe customer base, it works with clients all over the North-East, as far North as Cramlington, down to Northallerton and across to Barnard Castle.

They include a range of customers from hospitals and pharmaceutical manufacturers, to engineering and manufacturing firms.

MD Monk, who’s a shareholder in the business, added: “We’ve got a wealth of experience between us after all working in the industry for a lot of years.

“We’re in a very competitive market, especially with companies who do what we do online only, but our biggest strengths are our locality and service, as well as our product knowledge and expertise.

“There are lots of wholesalers like us that are purely internet based, but we’re competitive with all of them and we cater for the whole spectrum.”

Upex carries an extensive range of stock in-house, which is supported by direct access to local and national supplies, boasting a same-day or 24-hour delivery.