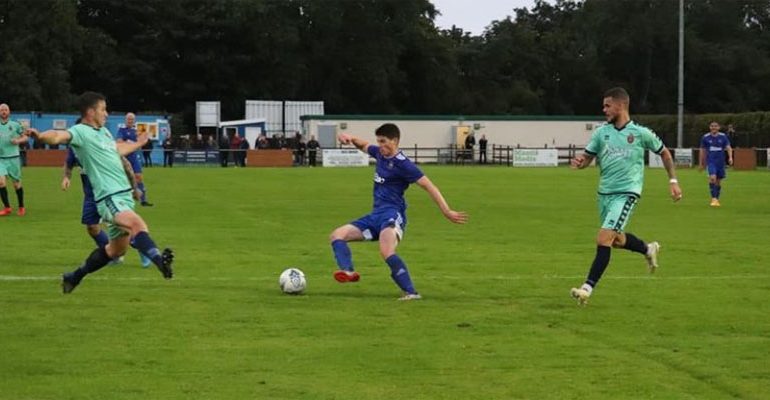 Newton Aycliffe gave an excellent account of themselves as they were narrowly beaten by Spennymoor Town at The Beaumont Landscapes Stadium.

Glen Taylor scored the only goal of the game from the penalty spot 18 minutes from time as a game Aycliffe matched their Vanarama National League North opponents for much of the 90 minutes.

For the first time in 175 days supporters were welcomed back into the Beaumont Landscapes Stadium as the 150 permitted tickets were snapped up ahead of Tuesday’s pre-season friendly, with the torrential conditions doing little to deter their enthusiasm.

With just seven days to go until Aycliffe’s 2020/21 campaign gets underway in the Emirates FA Cup, Colin Stromsoy fielded a strong side against The Moors who themselves brought a convincing squad for their first game of pre-season.

It was the hosts who started brighter looking to put Spennymoor on the back foot forcing a freekick in a promising position inside five minutes but Ben Dibb-Fuller’s effort wasn’t troubling the Spennymoor goal.

Lewis Walton’s long ball found Liam Jarvie who was able to turn on the edge of the area, but the striker opted for goal much to the frustration of his partner Adam Burnicle as the ball trickled wide.

A minute later and Jarvie cut in from the left but his effort again lacked the conviction needed to test the Moors keeper.

It wasn’t until the 15th minute when the visitors first threatened as Taylor was able to pick up the ball in the final third and drive at Aycliffe’s defence, but his strike was well blocked by Aaron Brown and went behind for a corner.

Two minutes later and The Moors might have taken the lead after a well-timed run from Taylor saw his centre somehow evade Ben McKenna who couldn’t sort his feet out inside the six yard box with the goal at his mercy.

Dibb-Fuller tried his luck from distance again in the 22nd minute after some good link-up play with Marc Costello but his strike went wide.

Ethan Wood found space in midfield just after the half hour mark and his through ball set Burnicle away down the left but his first time strike went over the bar as Aycliffe continued to take the game to their opponents.

The best chance of the first half fell to Dibb-Fuller moments later after the Trialist in goal misplaced his pass straight to the Aycliffe man who jinked inside onto his right foot but bent his effort beyond the post.

Spennymoor began to edge their way back into the game as the half drew to a close first with Rob Ramshaw who fired over the bar after good work down the right by Ryan Hall before Mark Anderson found space in the area, but his snap shot went wide as the sides went in level at the break.

The second half saw an improved Spennymoor put Aycliffe on the back foot a little with Tyler Forbes looking menacing down the right before substitute Steve Thompson saw his effort go narrowly past Adam Pickford’s post.

With chances few and far between in the second half it was Aycliffe substitute Andrei Ardelean who almost broke the deadlock in the 70th minute, having cut in from the left he unleashed a fizzing effort which almost caught out Dale Eve who tipped over the bar.

A minute later though and it was Spennymoor who had the chance to take the lead having been awarded a penalty following Taylor’s tumble after Aycliffe struggled to deal with the long freekick into the box.

The referee did not hesitate to point to the spot and it was Taylor who picked himself up to convert well low to Pickford’s right.

The visitors could have doubled their lead five minutes later when Taylor’s mishit shot fell into the path of Thompson but he couldn’t get a strong enough connection to trouble Pickford.

Stromsoy turned to his bench as his side looked to earn a draw in the final 10 minutes of the game but it was Pickford who was on hand five minutes from time to make a stunning save to deny Thompson after Frank Mulhern’s pull back.

It wasn’t to be for Aycliffe who gave as good as they got against their Step 2 opponents as Spennymoor held on for the win, but there were more than enough positive signs for Stromsoy’s side as the new season edges nearer.