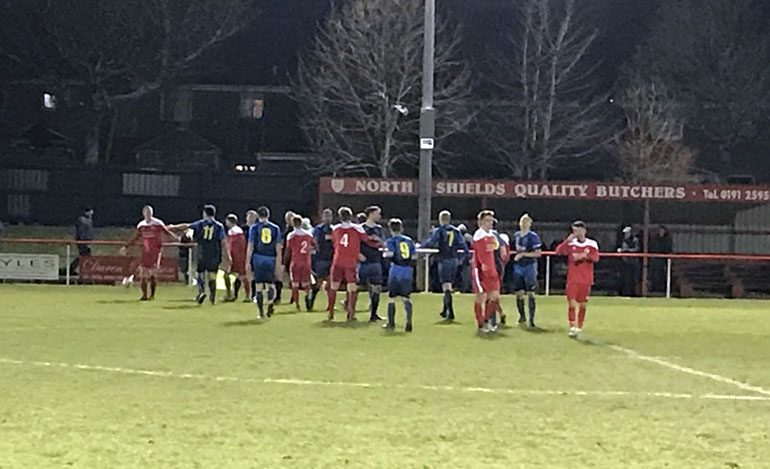 Newton Aycliffe edged further away from relegation danger with a credible draw at fifth-placed North Shields on Wednesday night.

The Newtonians have climbed up to 14th in the Northern League first division table, and to relative safety, after losing just one league game in their last 12.

Wednesday night’s fixture was played in driving wind and rain. To their credit, both teams tried to play good football in the conditions.

There were no real chances in the opening 25 minutes as both sides tried to get the upper hand.

Aycliffe broke the deadlock when Kurt Matthews finished a good team move with a low shot into the corner of the net.

The lead only lasted a minute as Shields equalised when a low shot from McFarlane beat James Winter.

Three minutes later Winter pulled off a fantastic double save for Aycliffe, which even the Shields fans applauded.

Shields came back though and Harmison finished off a team move with a strong shot that gave Winter no chance.

Aycliffe then had a couple of half chances through Matthews and Craig Hutchinson.

Shields pressed for a winner and Winter made another fine save in injury time. A Shields shot then skimmed the bar right at the end.

Aycliffe saw out time to gain the draw, which pushed them up to 14th in the table.

Aycliffe are next due to play Dunston away on Saturday (March 24) followed by a home game against Washington at Moore Lane Park on Tuesday night (March 27).