But there was better news for Aycliffe’s second team, who chalked up a win and a draw from their Bank Holiday weekend double-bill.

The first team lost both league games – at Darlington’s second XI on Saturday and at home to Barnard Castle on Monday.

The only bright spots were Chris Palmer’s good innings of 38 at Feethams on Saturday and Luke Telford’s brilliant 80 at home to Barney, earning them both the man-of-the-match awards.

Aycliffe slipped to seventh in the table, 41 points off a promotion place with only four games to go, and now face an uphill task of winning a second successive promotion.

Aycliffe’s second team (pictured below), by contrast, had an excellent weekend, winning away at Yarm by four wickets on the Bank Holiday Monday after earning a well-deserved draw at home to Bishop Auckland on Saturday. 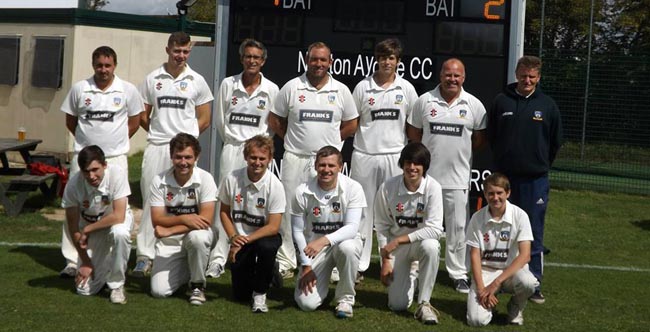 Darryn Bancroft’s season’s best score of 68 helped take Aycliffe to their sixth win of the season against Yarm and earn him man-of-the-match.

Adam Gittins was 24 not out and Jack Slatcher was 18 not out as Aycliffe scored 147 for six from 46.4 overs in reply to Yarm’s 146 for seven, with Slatcher taking four wickets for 36.

Danny Weldon also had a season’s best score of 47 not out on Saturday, and the MOTM award, which helped his side to a draw against Bishop Auckland.

Aycliffe’s first team go to Sedgefield this Saturday (1pm) to take on their second XI, while our second team are at home to Blackhall 2nds at Aycliffe Sports Club on Saturday (also 1pm).