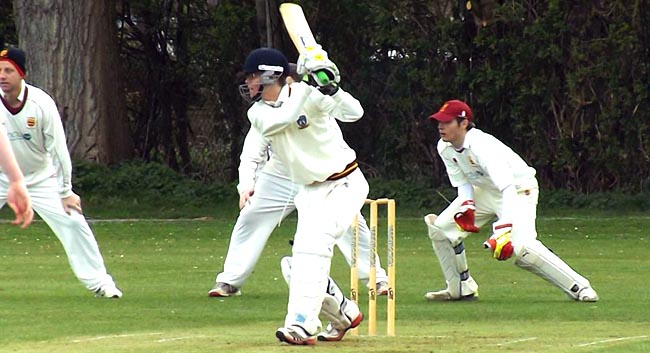 In a game badly affected by the rain, Aycliffe’s first XI were unlucky not to get a deserved win at the NYSD Division Two leaders as the home side’s last wicket pair survived a tense final seven overs to earn a draw.

Aycliffe’s first XI won the toss against Maltby’s first team and elected to bat first, scoring 156 all out from 44.2 overs.

Chris Palmer scored 44 and Sam Telford (pictured in action, above) was 42 not out, winning the man-of-the-match nomination, while Colin Myers Graham Telford both scored 16.

Maltby replied with 108 for 9 from 36 overs, with Sean Morgan taking three wickets for 24, Luke Telford three for 30 and Colin Myers two for 34.

Aycliffe’s second team’s Division Three game at home to Billingham Synthonia’s second XI was postponed due to a waterlogged ground.

Aycliffe are at home to Yarm’s first XI this Saturday (17th May, 1pm) while the second team go to Seaton Carew to take on their second team on Saturday (also 1pm).