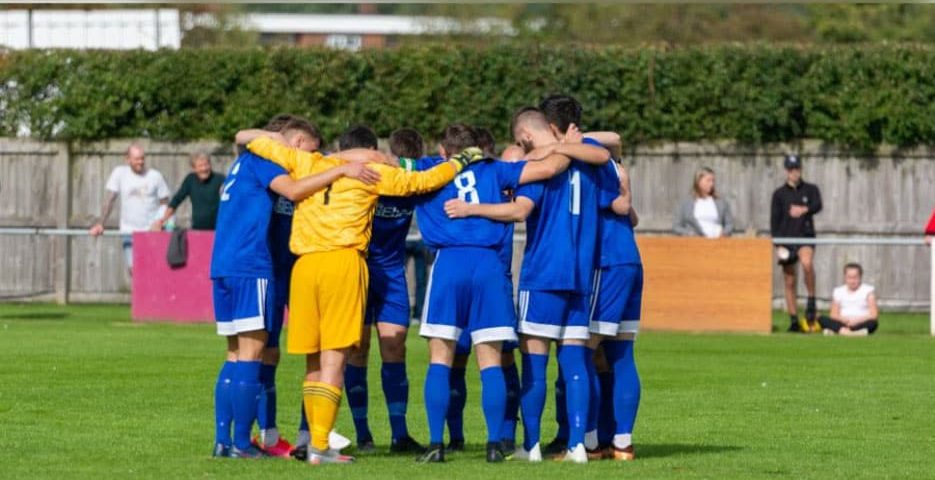 Newton Aycliffe booked their spot in the Second Qualifying Round of the Buildbase FA Vase with a comprehensive victory over Barnoldswick Town on Saturday.

Stromsoy wanted to see more of the same from his side’s display in the second half from Tuesday and take the game to Barnoldswick and he was rewarded when his side took a deserved lead inside 20 minutes of Saturday’s tie.

Having threatened for much of the opening exchanges Phelan finished smartly from inside the area, placing the ball into the bottom corner of Jack Little’s goal after Ethan Wood’s clever change of play.

The goal allowed the home side to dictate play with confidence and Marc Costello was unfortunate not to cap a wonderful move eight minutes later when Wood again cleverly bypassed the Barnoldswick defence with a cute lobbed pass. Costello beat the onrushing goalkeeper but lifted his shot onto the roof of the net.

Jarvie was unable to sort his feet on the half hour mark after Lewis Walton’s cross found the attacker at the back post as Aycliffe were the ones who continued to press.

Jarvie didn’t have to wait much longer though as he scored his first goal of the season to double the home side’s advantage five minutes later.

Walton’s throw from the left found Ben Reay who jinked his way between the Barnoldswick midfield and defence before releasing Jarvie and the former Darlington Town man made no mistake this time placing the ball beyond Little at his near post.

Jarvie nearly returned the favour to Reay minutes before half time when he found the midfielder on the edge of the area but Little got down well to his right to gather his snapshot and deny Reay a third goal in as many games.

Having kept Barnoldswick quiet for large periods of the first half, the visitors were perhaps fortunate not to go in at the break a man down after Andrew Hill’s lunge on Walton but referee Matthew Smith opted for a yellow card instead.

Aycliffe took a two goal lead into the interval but that lead was extended inside just 42 seconds of the restart to all but kill the tie.

Wood again involved for Aycliffe as his ball around the corner released Jarvie down the right and his pullback found Burnicle unmarked who managed to roll the ball into the far corner to score his first goal of the season.

The goal did ignite a response from the North West Counties Premier Division side as Zack Dale forced Adam Pickford into a smart stop down to his right from a close range volley.

Bradley Knox headed over for the visitors just before the hour mark as Aycliffe failed to clear their lines from a corner.

But it was the hosts who found the target again with Petitjean sticking a leg out at the back post to divert Jarvie’s cross into an almost empty net to seal a comfortable day for Aycliffe and secure their passage into the next round of the Vase.