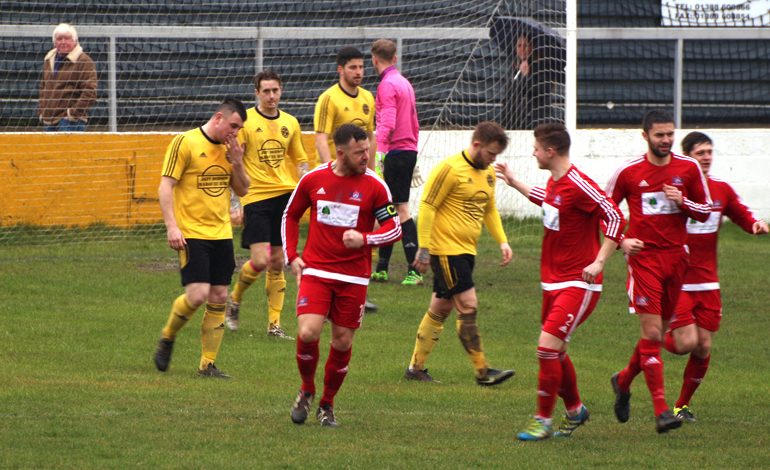 Newton Aycliffe were good value for this 3-0 win away to West Auckland, and had several good chances to come away with a much bigger win.

They got off to a flier after two minutes when a Ben Wood shot was blocked but it fell to captain Jamie Owens, who finished with a low shot into the corner.

The game then settled down as the midfields dominated the play, as the pitch started to cut up.

On 20 minutes, Mattie Lovegreen who had come into the side at right back, struck a great shot just over the bar.

A minute later, Stuart Banks got free in the penalty box, and got his shot away to the near post, only for home keeper Lewis to pull off a good save.

The remainder of the half produced few chances, as the teams worked hard to cope with the muddy conditions.

Aycliffe dominated the second half from start to finish. Banks was acting as a great outlet for Aycliffe, producing mazy runs on a poor surface and getting his pass away.

Owens had a good chance after 53 minutes when his shot rolled just past the right-hand post.

Two minutes later Wood repeated the feat. Aycliffe then brought on Josh Gray for Charlie Raby, after which Banks and Gray both tormented the West defence.

Aycliffe were in complete control and had further chances to stretch their lead, but again Owens and then Banks put efforts just past the post.

The pressure told just past the hour when Scott Howes overlapped down the left, and hit a powerful low shot. Lewis got down well to save, but only pushed it out to Owens who put it away for his second for 0-2.

Wood then had a curler tipped over the bar. With 20 minutes left, a shot by Aycliffe’s Gray was deflected and yet again it rolled just past the right-hand post.

The pressure continued and on 73 minutes Gray got his reward when he dribbled through and got a shot away; it was deflected and at last, this one rolled in just inside the right-hand post!

West, to their credit kept going and on 90 minutes, Phil Pentony made a good save from ex-Aycliffe player Zak Boagey.

The win takes Aycliffe to 51 points this season, and they currently sit ninth in the league. They return to Moore Lane on Tuesday (March 14) to play Seaham Red Star. They then travel to Sunderland RCA on Saturday May 18.