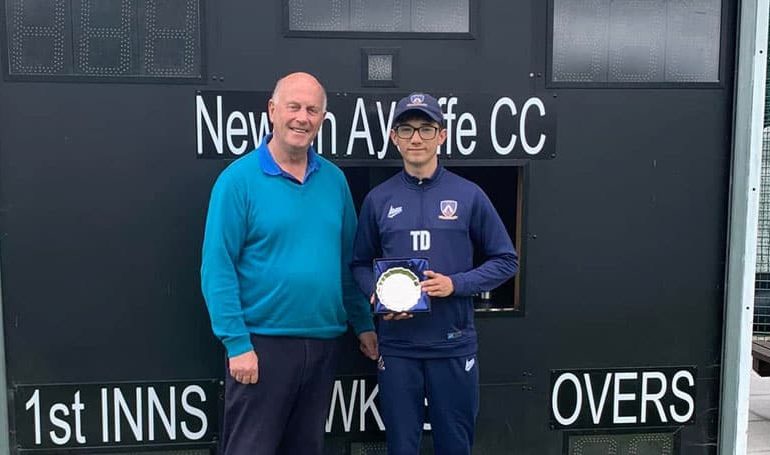 In a game that was badly disrupted by the rain, the first team finally broke their six match losing sequence with a dramatic home win against bottom of the table Stokesley 2nd XI by just six runs.
Aycliffe opener Sam Telford (sponsored by The Thomas-Fairhurst Family) made a timely return to form with a typically belligerent innings of 51 from just 29 balls, including six boundaries and three sixes.
17 year old Matty Greaves also deserves credit for an outstanding all round game scoring 39 runs in the Aycliffe innings and then taking 2 for 45 and holding the catch of the day to remove the visitors most dangerous batsman.
In a very tense finale, Luke Telford got Aycliffe back in the game taking 4 for 50 and then 15 year old Thomas Dearden removed the last two batsmen to dismiss the visitors for 193 with only 7 balls of the game remaining to give the homeside the maximum 25 points.
This vital win considerably eases Aycliffe’s relegation fears and moves them up to 8th place in the 2nd division table with 200 points from 17 games played.

As the rain got more persistent, conditions for the fielding side became increasingly difficult as the homeside rushed to victory after just 15.1 overs with Aycliffe’s Dan Weldon taking the only two wickets to fall.
Aycliffe’s 2nd XI picked up four bonus points from this defeat and they remain in 11th place in the table with 97 points from 15 games played.