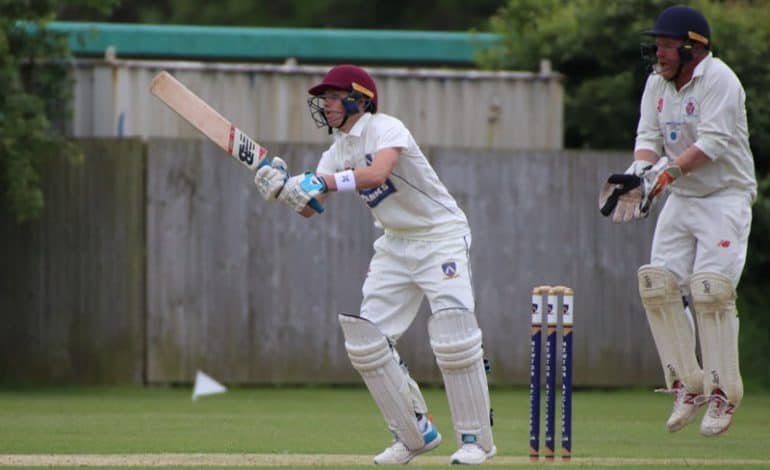 Aycliffe’s 1st XI salvaged a draw at home to Saltburn 2nd XI after a superb unbroken 10th wicket partnership of 51 between Sean Morgan (31 not out) and Leon Patel (24 not out) helped their team safely bat out the overs.

Morgan also bowled well earlier in the game and finished with the excellent figures of 4 for 41 from his 11 overs.

Special mention must also go to 17 year old Matty Greaves (pictured above) who took 2 for 34 when the visitors batted and then top scored in the Aycliffe reply with 44 off 51 balls and his innings included seven boundaries and a six.

The nine bonus points gained from this draw takes the Aycliffe 1st XI total to 159 from 13 games played and they sit in 8th place in the division two table.

Newton Aycliffe’s young 2nd XI made the homeside batsmen fight for every run, but were eventually defeated by four wickets with just 3.1 overs of the game remaining.

Aycliffe vice captain Dan Weldon put in an excellent all round performance, firstly scoring 31 off 47 balls with four boundaries and a six and then took two wickets for just 19 runs from his lengthy nine over spell when Sedgefield replied.

15 year old Dan Heaton also deserves praise when he top scored for Aycliffe with a senior career best 32 off 26 balls and the youngster hit six boundaries in his innings.

Aycliffe 2nds now have 75 points from 10 games played and they remain in 11th place in the 4th division table.