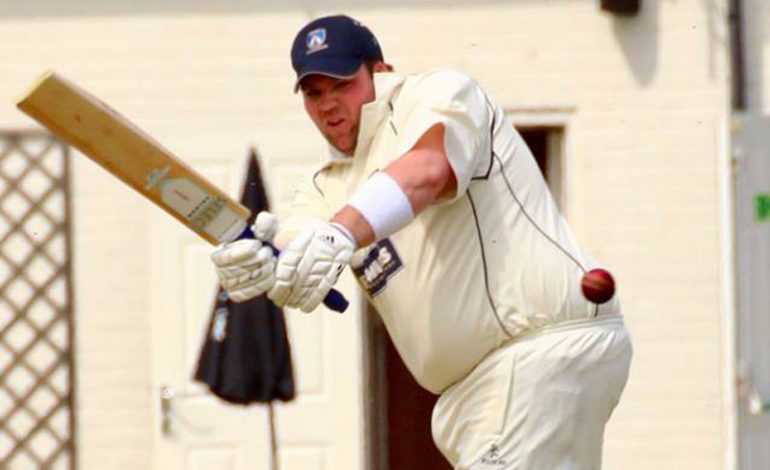 Aycliffe first team piled up the runs scoring 293 for 6 in their 50 overs, which was their highest innings total of the season so far, but were unable to force a win as the homeside reached 230 for 9 at stumps.
Luke Telford (sponsored by Mal and Jean Pattinson, pictured above) had a superb game for Aycliffe, firstly opening the batting scoring a season’s best 77 from 100 balls and his innings include 16 boundaries and then when the homeside replied, he starred with the ball taking 5 for 57 from 15 overs. All rounder Telford became the first player in the club’s history to twice achieve the notable milestone of scoring a half century and taking five wickets in an innings in the same match after first completing this rare feat in 2011.
Aycliffe batsman Joe Teasdale also deserves a mention for a brilliant career best 90 from just 61 balls and his explosive innings included eight boundaries and six maximums.
The draw earned Aycliffe a valuable 15 points and moves them up into the top half of the table in sixth place with 137 points from 10 games played.

Newton Aycliffe’s 2nd XI, which included had nine juniors in their ranks and had an average age of just 16, smashed the club second team record for the highest innings total when they scored a massive 309 for 5 in their 40 overs.
Captain Dan Weldon lead from the front with a brutal assault on the visitors bowling scoring a career best 88 from just 53 balls faced and his memorable innings included ten boundaries and five massive sixes. He took 19 balls to get his first seven runs and then his next 81 runs were taken from just 34 balls in an extraordinary display of powerful batting as the ball disappeared to all parts of the ground.
Special mention must also go to Jai Sander (81 from 64 balls) and Dan Bowmer (60 from 78 balls) who both also hit career best scores in the Aycliffe innings.
When the visitors replied they held on for a draw finishing on 188 for 8 from their allotted 40 overs.
The second team move up to 10th place in the table with 70 points from 9 games played.