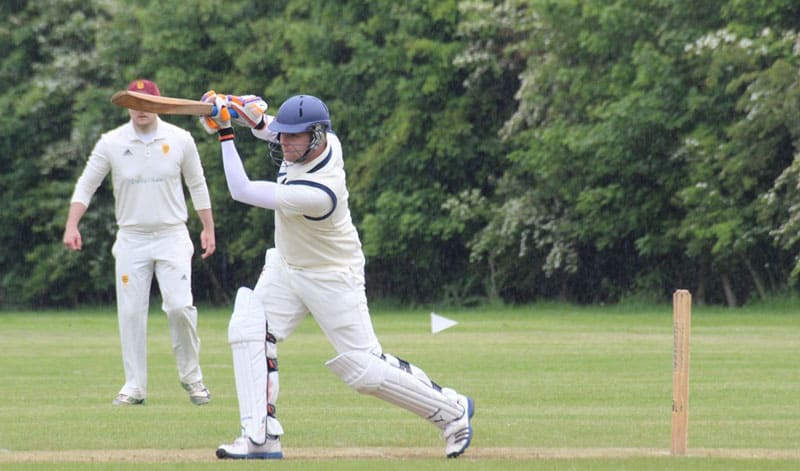 Aycliffe first team put in a tremendous effort in the field and made Thornaby 2nds fight for every run, but were still beaten in the very last over by just three wickets.
Aycliffe captain Adam Randall (pictured above, sponsored by DTS Joinery) continued his superb start to the season with his third half century in four games. This time he made his season’s highest score of 86 off only 61 balls faced and his powerful innings contained nine boundaries and four big sixes.
This defeat drops Aycliffe’s first team down to 8th place in the NYSD 2nd division with 82 points from eight games played.

Our young second team put in yet another outstanding all round performance to dig out a victory from a game that had earlier seemed to be going the way of Yarm 2nd XI.
In response to Aycliffe’s total of 164 all out, Yarm appeared to be coasting to victory at 71 for 0 after 13 overs, but they were remarkably bowled out for 137, still 27 runs short of their target.
In a dramatic finale, 13 year Harrison Pearson (sponsored by Hatty) bowled superbly to finish with career best figures of 5 for 38 from 8 overs. He was helped considerably in the field by Ryan Patrick, who set a new Aycliffe cricket club senior record after taking an extraordinary five outfield catches during the Yarm innings.
This memorable victory helped push the second team up to 6th place in the NYSD 4th division with 98 points from nine games played.