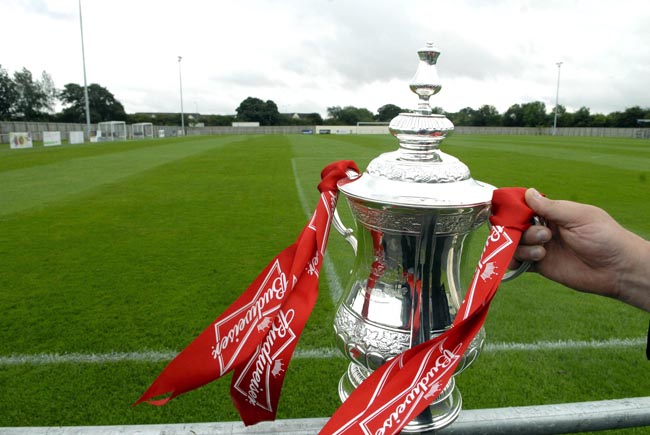 Aycliffe’s dreams of a decent run in the FA Cup were dashed at the Extra Preliminary Round stage on Saturday, as they went down to a 2-1 home defeat against Garforth Town.

The only changes seeing the unavailable James Oliver replaced by returning Chris Storey, and Craig Mickle being restricted to a place among the substitutes with the tight calf he suffered on Wednesday. Scott Oldfield made his first home appearance since re-joining the Club from Guisborough.

The home side started the game brightly. Almost from kick off, Oldfield blasted a shot over after good link up between Wing and Broom, before the Garforth keeper somehow kept out Atkinson’s shot.

However it took just three minutes before Aycliffe took the lead. A corner was cleared back out to Wing, and his cross was headed home by Broom.

However as the half progressed, the visitors came more into the game. In the 19th minute Mangham robbed Hinchley on the edge of the box, but fortunately for Aycliffe he dragged his shot wide.

But just 15 minutes later, they did draw level. Jake Johnson made an uncharacteristic mistake in the home goal, which was gratefully seized upon by Davis who had a simple finish.

At half time, boss Webster withdrew himself, with Connor Lowes coming on.

On 48’ somehow the Garforth keeper produced a top double save, to first deny Atkinson and then Broom.

However just eight minutes later and Aycliffe found themselves behind. Hinchley chased back to win possession, but his stray pass went straight to Davis, who cut inside Clough and found the corner of the net.

As Mickle replaced Morris with Aycliffe realising they needed to get back into the game, Atkinson and Clough both saw chances saved.

Newbould missed a glorious chance for the visitors to finish the match in the 85th minute as he found the side netting after rounding the keeper, before Lowes saw a vicious left footed shot tipped over by Hunter in the Garforth goal.

And with that went Aycliffe’s hopes.