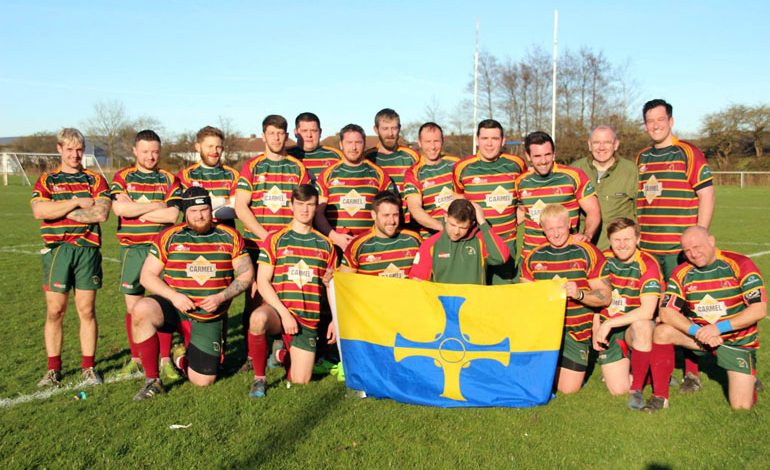 The last encounter between the two sides ended in a near-on century scored for Aycliffe, however, as with many teams, squads fielded at home are often stronger than those which travel.

The game began well for Aycliffe as the visitors immediately pressed into the T.D.S.O.B. half, the pressure resulting in young prospect Aidan Ryans crossing on eight minutes for the game’s first try, which was duly converted by skipper Lineton.

Following this, the game became rather scrappy and Aycliffe struggled to implement their game plan against an often-offside rush defence.

Despite this, the next ten minutes were spent in the T.D.S.O.B. half, with Aycliffe punching forward, and T.D.S.O.B. doing everything possible to slow the ball down.

The unerring pressure was rewarded on twenty-one minutes as utility back Chris Richards cut an unstoppable line to cross, taking the score to twelve nil, Lineton increasing the gap to fourteen with the conversion.

From the restart, Aycliffe again forged forward, but a line break was stopped dead by a high tackle on openside Andrew Tonkin which led to a scuffle breaking out fifteen metres from the T.D.S.O.B. line.

Captain Lineton was first in, and wound up headbutting a T.D.S.O.B. fist repeatedly for his troubles.

Following stern words from the ref, play resumed, with Aycliffe again fighting up field, despite questionable tactics at the breakdown from T.D.S.O.B., and continuous appeals from the home support.

The pressure and complexity of the Aycliffe game plan paid dividends and following a sharp lineout move, Tonkin cut a line that even a head-high tackle couldn’t have stopped, and he crossed under the posts, which was converted by the skipper to finish the half.

The second half saw Aycliffe camped firmly in the T.D.S.O.B. half, and despite pressing toward the line through tight pick and goes, the home defence held firm, electing to utilse a defensive style best characterised as; not entering rucks through the gate, and lying on the wrong side of the ball.

This spell was brought to a close as Jon Mcguigan ran a typically mazy line and surged over the line, taking the visitors to a twenty-six-point lead.

Ten minutes passed, during which Aycliffe continued to push forward, a substitution saw First XV debutant prop Dan Chamberlain enter the fray, and his presence immediately told, as he shored up the scrummage and crossed the line after a powerful pick and drive, only to be disallowed by the referee for an alleged knock on in earlier play. Another scuffle broke out close to the T.D.S.O.B. line, following which, Aycliffe tightened up their game, and the hits rained down on the home side.

Every home player who handled the ball was knocked back, rucks were hit with more intent with the defence lead by the backrow and hooker Ash Bolsover who beat all comers, including Bolsover driving back a prop twice his weight.

Despite this defensive dominance, T.D.S.O.B. were able to break through up the wing, with lock Ben Merritt making the covering tackle ten metres out from the Aycliffe line.

Calls of high tackle went up from the home side, and the referee responded, giving Merritt an early finish on 71 minutes citing ‘team infringements’ as the cause of the yellow card. T.D.S.O.B. made the most of their one-man advantage, driving over the oldest player in the league to gain a consolation score, which they converted.

However, Aycliffe were to have the last word, with veteran flanker Warren Parsonage cutting a sickening line to find himself one-on-one with the fullback, who duly dived out of the path of the rampaging openside, leaving him a clear run in from thirty out. Lineton added the extras and the final whistle was blown.

The game saw Aycliffe continue their unbeaten run, and move one game closer to winning the league.

There is no fixture this coming week, but Aycliffe travel up to Wallsend on April 9 for their penultimate game, which could see them crowned DN3 champions.