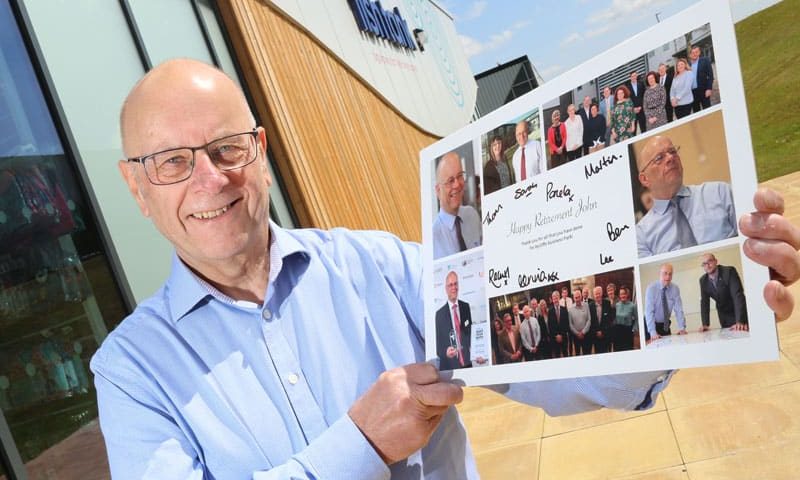 Aycliffe Business Park Community (ABPC) has said thank you to one of its biggest ambassadors as he calls time on his career.

Business Durham’s John Parnell retires next month after a lengthy career in business support and as a civil servant.

John was part of the original Aycliffe Business Park steering group which was set up informally in 2012, and has continued as a trusted advisor since the organisation was formalised in 2016.

He was awarded the coveted Ambassador gong at Aycliffe Business Park’s 2018 Make Your Mark awards ceremony in recognition of his services to the park.

John retires next month after nearly ten years with Business Durham – and he looks back on his relationship with Aycliffe with great pride.

“I’ve been associated with Aycliffe since the 1980s, when I worked for the Department for Trade and Industry,” said John.

“So I’ve seen the development of the park over the years and it’s been great to have played a part in the formation of Aycliffe Business Park Community.

“Sometimes you can’t always make progress as quickly as you’d like – and, of course, Covid hasn’t helped over the last 18 months – but the ABPC board is made up of loyal directors who give up their own time to do what they do.

“We’re now seeing events coming back and a couple of new appointments which I’m sure will have a positive impact, so I look forward to seeing its development in the coming months and years.”

The ABPC board presented John with a large signed picture collage and gift vouchers at his final board meeting held on August 3.

ABPC chair Kerina Clark said: “We’re so grateful to John for his outstanding contribution to Aycliffe Business Park and all that we’ve achieved over the last nine or so years.

“I’d like to also personally thank him for his consistent support and his above and beyond approach to all he does.

“His knowledge of the park and his connections with businesses has always been a huge asset, and he leaves a big void as we continue the work we’ve done as a group with John’s fantastic support.”

John is looking forward to spending more time with his family and added: “I’ve never given up the hope of getting better at golf!

“But I’m looking forward to just having a better relationship with time generally. Walking was always my passion so I’ll be doing a bit more of that.

“My family and grandchildren are also relocating from Norwich back to the North-East soon so I’m looking forward to seeing more of them.”

Originally from Croydon in South London, John moved to the North-East as a youngster and spent most of his schooling days in the Peterlee area.

He has spent more recent years as Business and Engagement Manager Account (South) for Business Durham, the business support service for Durham County Council, helping to deliver more and better jobs and a strong competitive economy.

Working within the Business Engagement Team, his role has been to engage with and proactively support businesses, connecting them with the right funding, advice, and networks they need to grow and thrive, and building long term relationships to foster sustainable growth in County Durham.