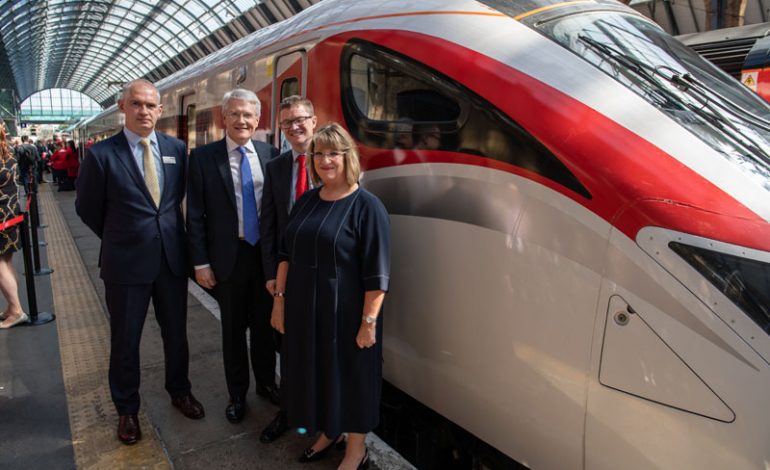 One of Hitachi’s Newton Aycliffe-built Azuma trains carried passengers on the East Coast Main Line for the first time this week.

The new Intercity Expresses should have started running last December, but the already postponed launch was further delayed by continuing problems with electromagnetic interference, which affected signalling and safety-critical CCTV systems.

The problems have now been resolved on part of the East Coast Main Line, and the first Azuma entered service on Wednesday by working the 11.03am from London King’s Cross to Leeds, returning to London from West Yorkshire at 1.45pm.

Pictures: Take a look at Azuma assets inside Hitachi train

No date has been set for introducing the new trains on the section between Edinburgh and Doncaster, but LNER is hoping it can start running them on services to Newcastle and Scotland by the end of the year.

The Azumas have better acceleration than the trains they are replacing, but a full timetable taking advantage of this is not expected to start before December 2020.

LNER managing director David Horne said: “The launch of the first Azuma trains is a truly momentous event for LNER and the communities that we serve.

“Setting new benchmarks in rail travel is part of our DNA, and the new Azuma trains are the next big step for LNER in making the customer experience the best that it can be.

“They will transform travel with improved reliability, greater levels of comfort and an average of 100 more seats on every train compared to the current fleet.

“From extra leg-room and improved Wi-Fi to being more environmentally friendly and accessible to more people, the Azuma experience is a real revolution in rail travel.’

The new Azuma trains are part of the government’s £5.7bn Intercity Express Programme which will modernise LNER services on the key intercity route used by more than 22 million people each year.

Transport Secretary Chris Grayling MP said: “The arrival of the state-of-the-art Azuma trains along the East Coast is the next step in one of the biggest transformations on the UK’s railway.

“We are proud the Azumas have been built in the UK, supporting our supply chain and creating hundreds of skilled jobs.”