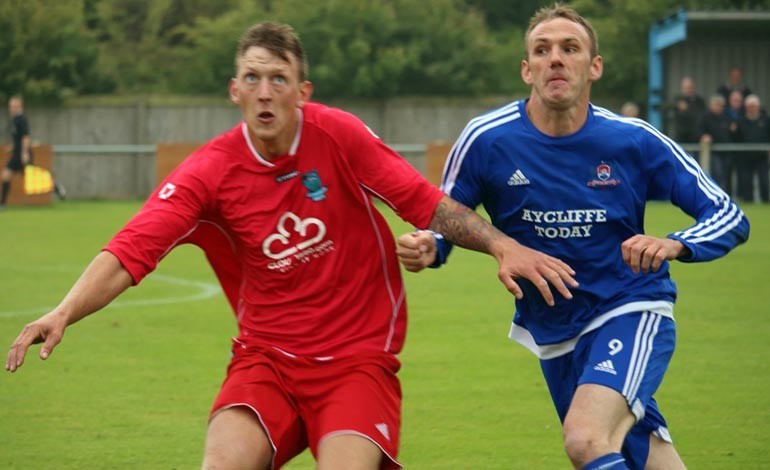 Newton Aycliffe bounced back from last week’s FA Cup exit by securing a place in the FA Vase first round proper at the weekend.

Three second half-goals against a tough Barnoldswick Town team secured Aycliffe’s passage to the next round, where they will travel to Northern League second division side Chester-le-Street on Saturday 31st October.

Once again Aycliffe took some time to get going on Saturday and had to survive a disallowed goal early in the second half.

However, after 51 minutes Dennis Knight broke the deadlock with one of his speciality free kicks giving the keeper no chance.

Similar to the FA Cup win at Barnoldswick’s league rivals, Nelson, Knight’s goal gave Aycliffe the spur they needed to get more.

Fifteen minutes later Paul Garthwaite’s tireless running paid off allowing him the opportunity to chip the ball into the visitors’ net.

The third came in the last minute with sub Jordan Laidler side footing the ball home.

Barnoldswick saw one player red-carded, several yellows and were annoyed at a disallowed goal, ruled offside.

However, Aycliffe were well worth the win and deserved to progress.

With the amount of cup matches played in recent weeks Aycliffe have fallen behind on their league programme and will be looking to pick up points over the next few weeks in the six league games scheduled before the next round of the Vase.

The biggest disappointment for Aycliffe was the meagre crowd which turned up for the FA Vase game. Just 81 spectators turned out to see our town’s team play in a major national competition.

Naturally that was a huge blow, especially to the hard working committee members who had spent hours getting the pitch ready for the kick off. Hopefully, the spectators will return sooner rather than later.