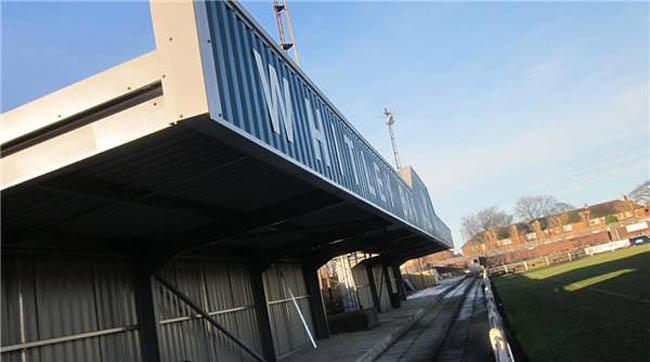 Newton Aycliffe FC’s travel woes continue on Saturday, as they once again returned home empty handed from an away game.

The conditions on Tyneside on Saturday were, in truth, awful but as the old adage goes, it was the same for both sides. The strong wind was blowing straight down the pitch, meaning each team were required to play directly into it for a half of the game each.

Keeper Andrew Spence returned from injury in goal, while James Oliver was brought into a central midfield position. With leading scorer Jamie Owens injured, Dan Mellanby was brought back in alongside Tom Atkinson up front.

The hosts started well. Spence was forced to prove his fitness twice early on, getting down well to save as Aycliffe found themselves somewhat penned in against the wind.

As the mid-way point in the first half arrived, so too did the opening goal. The Whitley Bay right winger was afforded far too much room as he cut into the area and got to the by-line before cutting the ball back to Stephenson who finished from close range.

However, straight from the re-start, Aycliffe went up the other end. As Atkinson made his way into the box he was upended, with the referee pointing to the spot.

Given the deadly form Stuart Owen has been in from 12 yards, Aycliffe were sure they had a route back into the game. On this occasion though, Mark Cook guessed right, and saved well to his left.

Just another minute on the clock though, and Aycliffe were level. As they pressed forward again, the ball was cleared for a corner. The returning Paul Broom whipped a teasing ball in that Dan Mellanby managed to glance in at the near post.

With the wind and bobbly pitch making it difficult for either team to take control of the game, it looked as though Aycliffe were going to get to the break at 1-1.

Unfortunately though on 42 minutes a fortunate ricochet fell to Reid on the edge of the box, and his rasping drive gave Spence no chance.

Straight from the re-start was arguably the most controversial moment of the afternoon. A long wind assisted through ball saw Atkinson running away from the Bay defence and seemingly clear on goal. As he was brought down, everyone in the ground looked to the referee to see the inevitable red card pulled out. Inexplicably, he chose to take no further action!

Cook was responsible for keeping the lead for the home side as the half progressed. On 55 minutes and again on 57 he denied Mellanby with top class saves.

Broom, recovering from illness did well to get through an hour of the game, and then saw Hedley come on to replace him. It didn’t affect the flow of the game, with Young the next to go close. His free kick just falling the wrong side of the post.

On 70, Chow reminded everyone of his danger, as he got clear in the box but somehow blazed his shot over the bar.

And then on 77, disaster struck for Aycliffe. An innocuous ball through to Spence saw him strike the ball upfield. Unfortunately it struck Clough, before falling straight to Stephenson in front of an open goal, which he gleefully passed in to.

On Wednesday evening, Aycliffe welcome table toppers Celtic Nation to Moore Lane Park (7.45pm). The Cumbrians have received generous financial backing from the American billionaire owner, and have ambitious plans to move through the football pyramid. Admission is priced at £6 adults, £4 concessions, with u12s going for free.

The Club also have tickets available for both their upcoming events. On 28th March The Three Legends come to the WMC, before on 9th May Terry ‘The Bull’ Jenkins comes for a night of darts. For more details of either of these events please contact Dan Lewis, Paul McGeary or Barry Waters.