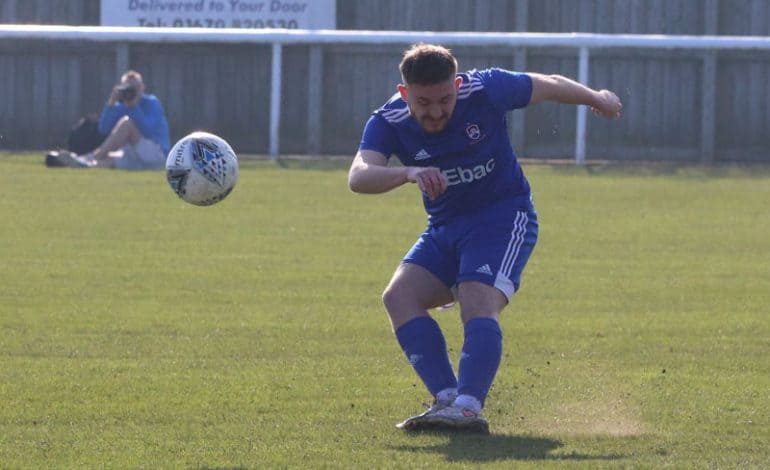 Newton Aycliffe got back to winning ways in glorious Northumberland weather.

Following a run of three games without a victory, and while on a ground on which they hadn’t tasted defeat at since March 2015, the manner of the 4-2 reverse at The Beaumont Landscapes Stadium last October, where the visitors took a four goal lead by the opening minutes of the second half, won’t have been forgotten.

Aycliffe switched to three at the back with the home grown Brennan Fitzpatrick coming into midfield and it didn’t take long for him to make a telling contribution, gaining possession in the middle of the park before slipping the ball to Ethan Wood whose pinpoint pass between two defenders set Liam Jarvie free and, with just McHugh in the Colliers goal to beat, he made no mistake as he smashed the ball into the bottom corner to give The Newtonians the lead after only ten minutes.

Despite Alexander Walker limping off in the 41st minute, the first period went in Aycliffe’s favour with waves of attacks eventually leading to a golden opportunity to double their lead but Andrei Ardelean couldn’t put the finishing touch to some fine build-up play.

The visitors lead was doubled just before the break when Jarvie, breaking through the middle of the home back line, had his trailing leg clipped from behind as he reached the penalty area giving the referee little choice but to give the spot kick.

It was Jarvie himself who got back up, brushed himself down, and lashed the spot kick past McHugh to send Aycliffe in at the break two goals to the good.

While a missed penalty was the difference last week, as Aycliffe came away empty handed from Sunderland RCA, it turned out that this one being converted was to be the fine margin which sent the points back down to County Durham at quarter to five as Ashington threw everything at Aycliffe to try to claw back the deficit.

The home side, particularly in the dugout, felt that they should have been awarded two penalties despite one claim clearly hitting Walton in the midriff but neither the referee nor the assistant saw anything wrong.

The home sides’ breaks did lead to a goal with nine minutes left as they got the ball wide on the right to Hanson who strode forward and squared to Harmison to give him the simplest of tap ins.

Aycliffe managed the remainder of the game, despite Ashington looking the most dangerous, and didn’t allow the hosts any further chances digging in to see the victory out.

Aycliffe’s next game comes this Friday night as they welcome Northallerton Town to The Beaumont Landscapes Stadium in the Ebac Northern League Division One with a 7.45pm kick off.

This game also sees The Frank Swinburne Memorial Trophy being contested for with Aycliffe looking to retain the trophy.

Above picture by Yvonne Wood shows Aycliffe defender Lewis Walton kicking up the dust on a hot day in Ashington.