Recorded incidences of anti-social behaviour dropped overall by just under 25% in Newton Aycliffe, in the 12 months to end of September 2016.

In a report published today (Thursday December 22) there has been an overall force-wide drop of 14%.

The decrease is highlighted in the latest Public Performance Report from Ron Hogg, the Police, Crime and Victims’ Commissioner for County Durham and Darlington.

There were reductions in every neighbourhood policing area, a trend which has continued since Ron published his last report in June this year.

Hogg said: “Residents have told me during past consultations that tackling anti-social behaviour is a priority for them. 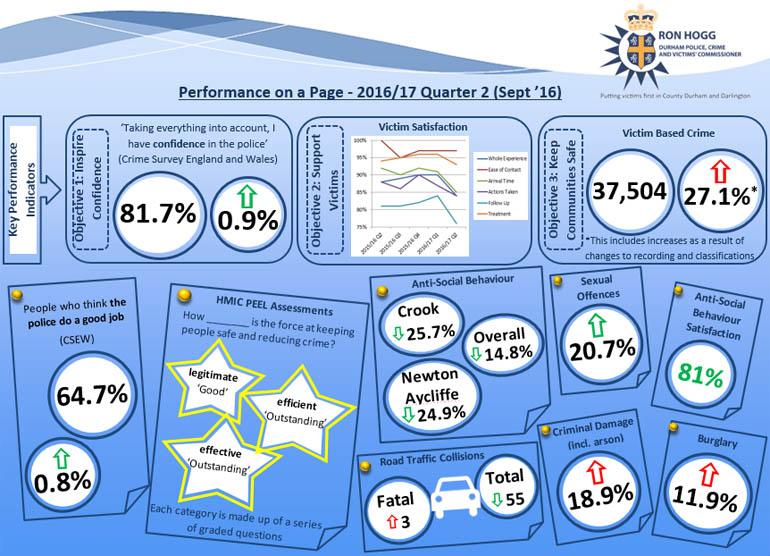 “This decrease in anti-social behaviour is good news for everyone living in the area, and police and partners are continuing to work hard on behalf of our communities.

“Whilst these figures are good news, we will not rest on our laurels and will continue to work with local people to prevent and tackle anti-social behaviour.”

The report also shows that victim-based crime has increased by 27.1%. This is partly due to changes in recording practices and compliance with national recording guidelines, which mean that cases of harassment are now recorded as crimes when they may not have been previously.

There have been increases in burglary, vehicle crime, shoplifting and criminal damage.

Hogg added: “I would like to reassure people that the Constabulary has a number of plans in place to tackle these increases.

“Burglary figures are already reducing back to their previous level, suggesting plans like this are effective.

“I will continue to monitor all crime, public confidence and victim satisfaction closely, and I will release my Public Performance Report every quarter. It is important to remember that the Durham and Darlington area is one of the safest in the country to live, work, visit and do business.

“Between July and September there was been a slight drop in victims’ satisfaction with their experience with the Police. I understand that this is due methodological changes resulting from the Constabulary’s new ICT system. I expect that levels will increase again in the next quarter.

“In the meantime, especially over the festive period, I encourage residents and businesses to take appropriate steps to keep themselves and their property safe.

“Remember to keep your properties and cars locked, stay visible on dark winter nights and if you’re going out to enjoy the festivities, please make sure you can get home safely.”