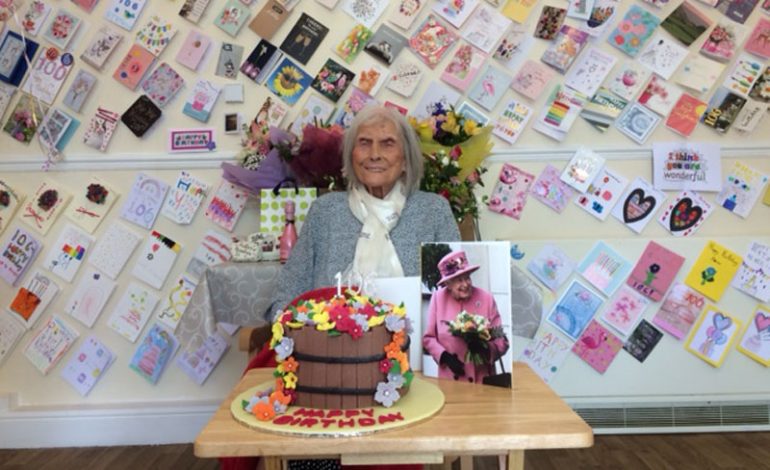 Renee Glover, believed to be the oldest woman in Darlington, marked her 106th birthday with 587 cards and special celebrations at her care home in Darlington.

Before the big day, Renee’s five-generation family launched an appeal for local people to send her cards to mark the occasion as lockdown had impacted other plans, hoping for 106 of them.

More than 300 cards were sent in to the care home, Wilton House, and a collection box was added to the entrance of Tesco in Newton Aycliffe which received well over 200 more.

The cards from the collection box were delivered by members from Aycliffe Bike Club who arranged a special procession.

Renee’s family have been blown away by the public’s response, with enough cards being sent to decorate a whole wall in the dining room of her care home.

Socially distanced celebrations were planned by Renee’s granddaughters and care home staff. Renee’s family took it in turns to visit her from outside of the home while she sat in the dining room surrounded by all of her cards.

A singer and guitarist performed outside for residents, Subway kindly gifted a birthday tea of sandwiches, crisps and cookies, and Cakes by Sarah donated a birthday cake.

Renee’s granddaughter Sarah said: “We have been totally overwhelmed by the kindness and generosity of the general public and local businesses which have contributed to making this lockdown birthday so very special.”

Emma Hardy, care home manager at Wilton House added: “We have had the absolute pleasure of caring for Renee for four years. She is an amazing lady and deserving of every single card she received, which have taken over our dining room!

“We made her birthday really special despite the social distancing protections we have in place. It was lovely for Renee to see her family, enjoy some music, cake and a birthday tea.

“Some of our other residents also got to celebrate with her from a safe 2m distance.”

Renee worked at the Royal Ordinance Factory in Newton Aycliffe as an inspector during the war. She lived with her family before moving into Wilton House in 2016.

Aycliffe Angels was the name given to the workers of ROF Aycliffe; a World War II Munitions factory.

17,000 women came from the surrounding towns and villages to work at the factory filling shells and bullets and assembling detonators and fuses for the war effort.