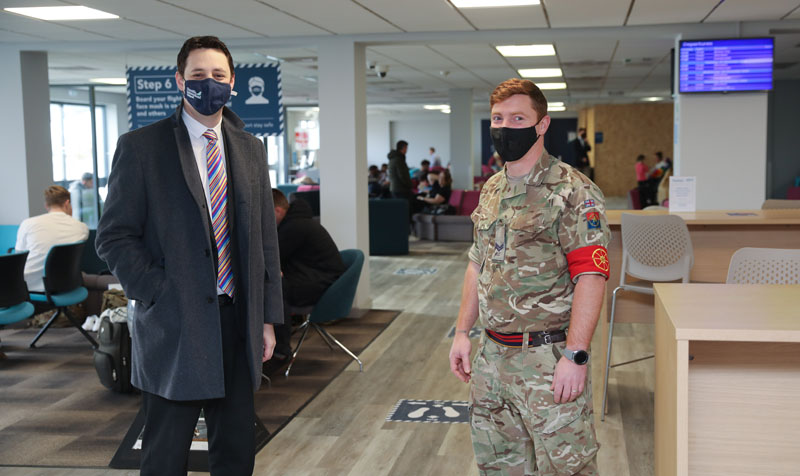 Hundreds of Armed Forces members and their families have flown out of Teesside International Airport bound for Cyprus for military deployment.

More than 510 servicemen and women, based at Catterick, departed Teesside Airport – Newton Aycliffe’s nearest airport – in four flights chartered by the Army during November.

The benefit of having an international airport on Teesside, in close proximity to the British Army’s largest garrison in the world, means personnel and their families don’t have long drives south for their flights.

They and their families will now be stationed at the Episkopi base on the Mediterranean island country for two years.

Teesside International began its life in 1941 as RAF Middleton St. George, operated by Bomber Command, and was home to many Canadian squadrons during WWII.

The RAF may have left in 1964, but as a civilian airfield the airport has maintained a long and proud relationship with the RAF.

Its airspace and runway are frequently used by Cobham Aviation Services, who provide vital airborne training facilities for the Ministry of Defence, NATO, and the US Air Force, employing more than 60 highly skilled people at Teesside.

Cobham recently signed a new long-term deal with Teesside Airport that will keep them stationed at the airport for years to come.

Tees Valley mayor Ben Houchen said: “Our Armed Forces do a hugely important job, everyday putting their lives on the line to keep us safe.

“Having the opportunity to hear the stories of service personnel and their families leaving our region for a two-year deployment was incredibly moving.

“I’ve always said our airport is more than just about holiday flights, and these are arguably some of the most important flights we could ever put on – flying our servicemen and women overseas to protect our nation.

“I’m delighted the Army has been able to use Teesside Airport to put on these flights, and I want to pay tribute to everyone in our Armed Forces who are doing their bit, even more so this close to Christmas, to keep us all safe back at home.”

Major Matt Nuttall for the Army said: “It’s fantastic for the troops and their families to be able to fly to Cyprus from Teesside Airport as it is so close to their current home in Catterick – it means that they don’t have to make the long drive to RAF Brize Norton to catch their flights.

General flight information and more details on safety measures introduced at the airport as a response to the coronavirus pandemic can be found at www.teessideinternational.com.