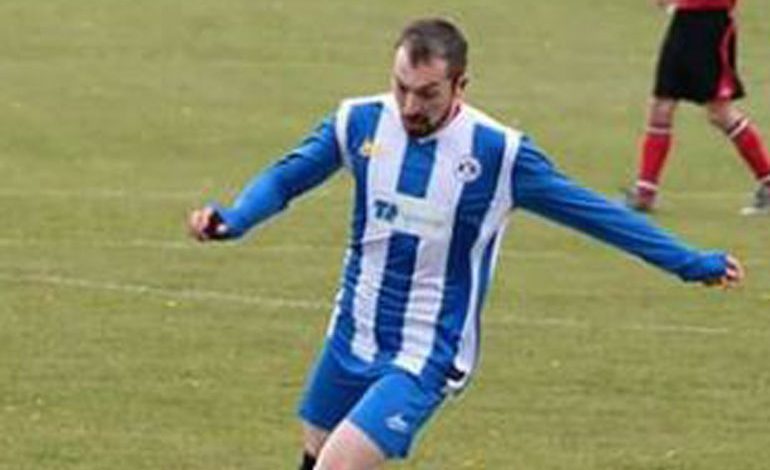 The Aycliffe side got off to a flyer with the first of Kyle Allen’s (pictured) six goals coming in the eighth minute with a cheeky lob from outside of the box beating the home keeper to make it 1-0.

The second goal came on 15 minutes with the home side putting through their own net and a third quickly followed when Jimmy Cameron broke free and slotted home.

It was soon 4-0 to the visitors with Allen getting his second after rounding the keeper on 22 minutes to make it look like it was going to be a comfortable afternoon for the Sports Club.

However, complacency kicked in and a few mistakes helped the home side back into the game and it was 4-2 as half-time approached.

The sports club made sure there was still a comfortable gap going into the break though, with Allen grabbing his hat-trick just before the interval.

A strike from outside the box for the home side managed to get past goalkeeper Andy Hartley to make it 5-3, but again the Sports Club stepped up a gear and made it 6-3 shortly after.

The Three Tons then started to apply some much needed pressure and quickly managed to get back into the game, clawing it back to 6-5 by the 70-minute mark.

Last season’s Player of the Year and top scorer Allen grabbed his fifth of the game to make it 7-5 but a quick return from the Tons made it 7-6 with 10 minutes remaining.

To cap off a Man of the Match performance, however, Allen quickly gave the Aycliffe side the two goal cushion again to make it 8-6 and that’s how the game eventually finished.

This week sees the team away to Darlington RA.

NASC FC would also like to take this opportunity to thank Home kit Sponsor for 2017-18, TR Fastenings.